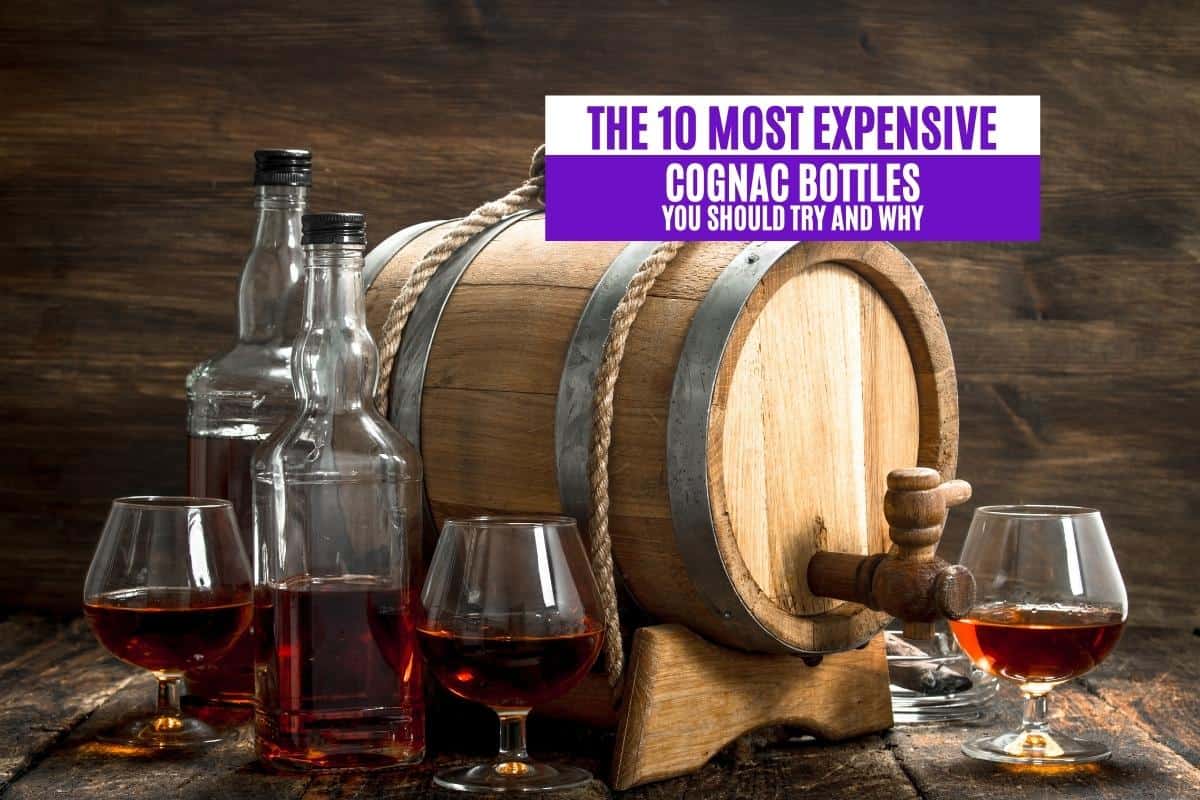 Cognac is twice-distilled brandy that is made from grapes grown in the Cognac region of France. A symbol of luxury around the world, cognac is a liquor with a fascinating history that stretches back centuries.

There are somewhere around two hundred cognac producers in business these days. Some of the biggest producers include Hennessy, Remy Martin, Courvoisier, and Martell.

Let’s take a look at these and other questions to help you get one step closer to the title of cognac connoisseur.

What’s So Special About Cognac, Anyway?

The story of Cognac can be traced all the way back to the 16th century. During this time, the Dutch arrived in France where they enjoyed the many fine wines there. However, when they tried to transport wine back to their homeland, they found it was hard to keep it drinkable.

For this reason, they started distilling the wine into eau-de-vie. The resulting product was known as brandewijn, which translates to burnt wine. These days, we refer to this drink as brandy.

Wine merchants began distilling their eau-de-vie twice over, allowing them to save space when they were transporting them.

Cognac houses began being formed in the 18th century starting with Martell in 1715. These houses would buy brandies from grape farmers rather than producing all of the ingredients from scratch. This practice still occurs to this day, where companies will buy eaux-de-vie or grapes that fit very strict standards.

The history of cognac continued evolving and growing as time chugged towards our current day. One major event in the history of cognac is that there was an aphid outbreak in the 1870s. While a solution was eventually found, this outbreak led to the entire plant dying and reducing the area under vine in the Cognac region from 280,000 hectares to 40,000 hectares in just two decades.

In the 1900s, six traditional Cognac growing regions were outlined as being under the protection of the law. A number of cognac cocktails became popular at this time, including the Corpse Reviver, the Sidecar, and Vieux Carre.

These days, cognac maintains its status as a luxurious drink. Interestingly, though, French people aren’t necessarily interested in drinking cognac. Instead, they prefer whiskey.

What’s the Difference Between Cognac and Brandy?

Cognac is a brandy, but brandy isn’t necessarily cognac. Brandy is a distilled spirit that is made using fruit juice that has been fermented. Grapes or other fruit can be used to produce brandy.

On the other hand, cognac is a brandy that is made from white grapes from specific regions in France. There are six of these territories.

The primary ingredient in cognac is the Ugni Blanc grape variety. However, the grapes sourced from Grand Champagne are typically the most coveted of all cognac grapes. In order to make cognac, the liquid has to be distilled twice.

The way that cognac is produced is very specific. Copper pot stills must be used, and the product must be aged for a minimum of two years in French oak barrels.

The season of distilling cognac stretched from October 1 to March 31.

While cognac has to come from the Southwest France region known as the Cognac region, brandy can be made anywhere in the world.

The bottle of this fine cognac is an updated version of the Baccarat crystal decanter crafted by Thomas Bastide. Tasting of wild roses, crystallized fruit, and earthy tones, this cognac is a truly special treat.

Madison Hardy has been world-famous for its cognacs since 1863. This particular type of cognac is the oldest known unblended cognac out there. With only a limited edition of 300 decanters, when you purchase this bottle you receive a certificate of authenticity as well as a numbered bottle.

The origin story of this particular cognac can be traced back to the 1870s. The founder of Madison Hardy, Antoine Hardy, gathered a number of batches of eaux-de-vie from before the phylloxera period. In this cognac, you can taste hints of oak, chocolate, and coffee.

Retailing for $13,000 or more, this is truly a bottle for a special occasion.

Cognac is a product produced using plants that goes through a complicated processing regimen before being sold.

This cognac is one of only 1,492 bottles that were made. The bottles themselves are Baccarat crystal and even come with two classy tasting glasses. The eaux-de-vie used to make this wine is comprised of five rare types from different growing regions. This creates a taste that is said to be a combination of creamy vanilla, tropical fruits, and woody and spicy notes.

This limited edition cognac was released as a part of celebrating the one hundred and fiftieth birthday of Camus.

The eaux-de-vie that was used to make the seventh most expensive cognac in the world ranged from between forty and a hundred years old. This particular cognac is named after King Louis XIII, and it offers a truly unique taste that is highly structured. With notes of oak, spice, honey, leather, and chocolate, this bottle was only released in limited quantities.

The decanter of this cognac is made out of crystal with fine layers of gold, carbon, and titanium. Depending on the market, the cost of this cognac can range from $16,000 to $55,000.

Remy Martin is one of the well-known (and expensive) cognac brands out there. This is the highest-grossing bottle of Remy Martin, which was bought in 2013 for more than $44,000. This sale was a record in Hong Kong, as this was the first private sale of its kind in the country.

This Remy Martin was made using young eaux-de-vie. Since this is such an exclusive cognac, only a few people even really know what it tastes like! It is said, though, that this cognac sets standards of taste for the whole industry.

In 2020, Sotheby’s facilitated the sale of what they are calling the oldest Cognac vintage that has ever been sold at auction. This 70cl bottle of 1762 Gautier Cognac was purchased by a collector in Asia during an online-only sale.

In the final hour of the auction, bidders drove up the price on this special bottle. Before the sale, the high estimate of its potential sale had been 160,000 pounds. It ended up selling for 118,580 pounds, which is equivalent to about $144,000 USD.

One of the most amazing things about this expensive bottle of cognac is that it has survived so many major historical events. These include the Seven Years’ War, the French Revolution, and so much more. There is something truly remarkable about the fact that this bottle survived 250 years of history.

It is thought that the cognac was bottled sometime during the 1840s.

If you love French history and you love cognac, you’re going to love this one. A bottle of 1795 cognac that had been made in Brugerolle sold at auction for a little under $150,000 in 2012. What is historically notable about this bottle is that it accompanied Napoleon Bonaparte while he was pushing forward in his quest to rule the whole world.

This six-liter bottle is believed to have been opened by Napoleon after being victorious in battle as a way to celebrate. It is thought that this bottle is one of the last of its kind in the entire world.

A bottle of 1858 Croizet Cognac Leonie was sold at auction in September 2011 for more than $156,000. This is a blend from before the phylloxera attack that wiped out crops in the 1870s.

The story is that this particular bottle was removed from France during World War II. Supposedly, President Eisenhower opened this bottle during the planning of the Normandy D-Day invasions. Word on the street is that this cognac tastes of roses and poppies along with woody and fruity notes.

Coming in at a little under $195,000, the Hennessy Beaute du Siecle Cognac is obviously an exceptional work of cognac art. With a refined taste and using some of the rarest eaux-de-vie out there, this is an earthy drink like no other.

The bottle itself is also impressive in its craftmanship. Designed by Jean-Miche Othoniel, a french artist, it might be worth buying just for the vessel.

If you’re looking for a bottle for a seriously special occasion, take a gander at the Henri IV Dudognon Heritage Cognac Grande Champagne. Costing nearly two million dollars per bottle, this is clearly the winner for the most expensive cognac in the world.

Known as the DNA of Cognac, this bottle is covered in crystal, 24-karat gold, dipped in platinum, and covered in thousands of certified cut diamonds. This design was created by the infamous jewelry Jose Davalos.

With such a hefty price tag, is this bottle worth all the hype? While we certainly won’t try and convince you that this is a wise financial investment, we will pass along that cognac connoisseurs claim that one sip offers you a ticket straight to heaven.

How Should You Drink Cognac?

For such pricey bottles, you’ll probably want to think about trying a glass neat or on the rocks. After all, when a drink is costing you tens of thousands of dollars, it’s better to taste the real deal.

If you’re going with a more reasonably priced bottle, though, you have other options.

You might consider making cognac-based cocktails. You can replace the base ingredients in classic cocktails such as the Tom Collins, the Manhattan, or the Mint Julip. If you’re looking for an after-dinner drink, try a dry cocktail such as the Sazerac or the Sidecar.

The Most Expensive Cognac: Are Any of These Bottles in Your Price Range?

There is something so fascinating about the objects in our world that fetch the highest dollar. While you can drink cognac any night of the week, the most expensive cognac in the world is obviously reserved for special occasions. One has to wonder whether a truly delectable liquor is ever worth such a hefty price tag, but there’s really only one way to find out.