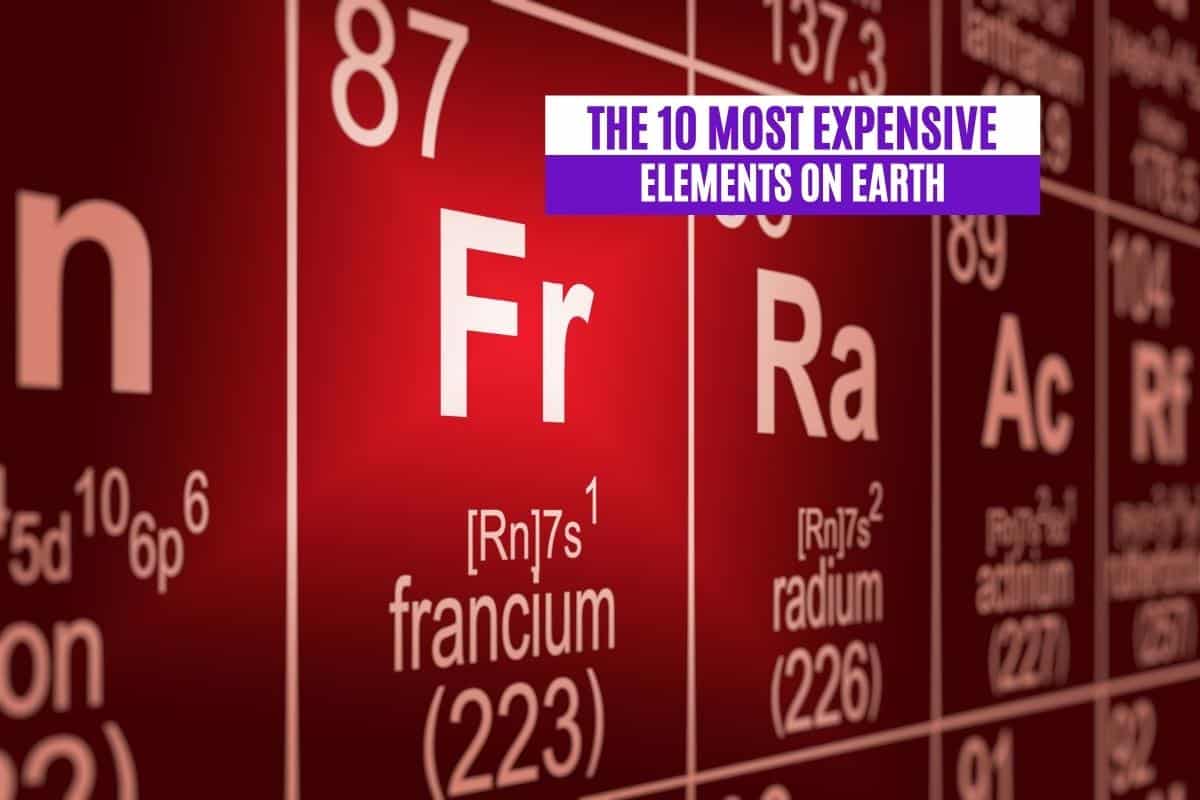 The rarer the element, the more expensive it is. The 10 most expensive elements on earth are:

The most expensive element on the list is Francium which costs about $1 billion per gram because naturally occurring Francium decays quickly. The cost to synthetically create Francium pushes up its cost. These valuable and rare elements are more expensive than gold, pushing gold to the No. 10 spot at the bottom of the list.

Are you interested in learning more? In this article, we will take you through the top 10 most expensive elements on earth and why they have such a whopping price tag.

Gold is a bright-yellow soft and malleable metal. That’s why you won’t find pure gold jewelry as it needs to be mixed with other alloys to become hard. China is the biggest producer of gold accounting for about 11% of the total production of gold.

Gold continues to fluctuate and gain value over time. Its value in 2022 is $65 per gram, but that hasn’t always stayed the same.

It’s been used for coins, jewelry, and other valuables over time. Because of its value, gold is also considered a good investment to diversify your portfolio. It’s especially useful as a hedge to protect your investments from economic events like inflation or currency devaluation.

At one point, the value of currencies was tied to gold, but countries have moved on. Switzerland was the last country to tie its currency to gold. Central banks continue to keep a portion of their reserves in gold.

Scandium is probably not a metal you have heard of, but it falls 9th on the list of the most expensive natural elements in the world, right after gold. It’s a silvery-white metallic element that is considered a rare element. It does get worn down by weathering over time and dissolves in most dilute acids.

Scandium is mainly used as alloys as it can be mixed in with other metals and used for many different purposes. It’s used in the aerospace industry. It’s also used in sports equipment such as baseball bats, bicycle frames, and lacrosse sticks.

Scandium costs about $270 per gram, more than 4 times the value of gold. It continues to be expensive because it’s rare and difficult to be extracted from ores.

Overall, scandium is found in abundance in the Earth’s crust. However, its distributed sparsely and only trace amounts can be found in minerals.

Because of the amount of money and time spent to mine and extract these trace amounts, the price of Scandium is higher. The worldwide production of scandium is still about 10 to 12 tonnes per year.

Plutonium is 8th on the list of the most expensive synthetic elements in the world and costs about $4,000 per gram. It’s a silvery-grey metal that tarnishes when exposed to air. When it’s exposed to moist air, plutonium oxidizes and expands up to 70% in volume.

It was first produced in 1940 at the University of California. The reason it’s one of the most expensive synthetic elements is that it’s hard to produce. Specialized reactors are needed to produce and maintain it safely.

Over 1/3rd of the energy produced in nuclear reactors comes from plutonium. Because it’s also used for spacecraft, it’s considered a vital power source for deep space missions. With all its uses, the demand for plutonium is also higher.

Painite is a very rare and expensive natural element. It’s a deep red gemstone that was first confused with ruby, but upon further investigation, they realized it was a new gemstone. It’s a rare gemstone because it’s made from boron and zirconium, which rarely mix with each other in nature.

Up until 2001, we had only discovered 3 painite crystals, and they have only been found in Myanmar. The first two painite specimens are kept in the Natural History Museum in London. Since then, we have discovered other fragments.

Painite costs about $9,000 per gram. It continues to remain rare, making it one of the most expensive elements.

Anything rare always ends up becoming more expensive because of high demand and low supply. So far, people have found over a thousand fragments of painite in Myanmar.

The problem with painite is that it is difficult for gem cutters to cut these gems and maintain the clarity and brilliance of the gem. Painite is resistant to scratches, but they can be more susceptible to damage from everyday wear or use. This makes the value of clear undamaged painite much higher.

Lutetium is a chemical element that is a silvery-white metal. Lutetium is a rare natural element, but it is more common than silver in the Earth’s crust. The problem is that lutetium is never found by itself and it can be difficult to separate it from other elements.

The petroleum industry uses lutetium in petroleum refineries as catalysts and other applications. It is also used for research purposes as hosts for X-ray phosphors or in optical lenses. Because of its rarity, it doesn’t have a lot of commercial uses.

Lutetium costs about $10,000 per gram. It’s nowhere close to the most expensive element in the world, but it’s pretty high cost.

Lutetium is mainly found in China, the US, Brazil, India, Sri Lanka, and Australia. But it’s rare and it’s difficult to extract. A hundred pounds of ore only yields about a gram or two of lutetium.

Tritium is the radioactive isotope of hydrogen. Naturally-occurring Tritium is very rare, with trace amounts in the atmosphere. But scientists have found a way to create Tritium in a nuclear reactor, which is why they are one of the most expensive synthetic elements.

Tritium is used as an energy source in glow-in-the-dark lights for watches, gun sights, and even self-illuminating key chains. Hospitals use tritium as a radioactive tracer. Nuclear and research facilities also use tritium as a nuclear fusion fuel in reactors and hydrogen bombs.

What makes Tritium so expensive? Tritium is expensive because of its rarity and the work that goes into/ creating and maintaining it safely.

Another reason why tritium is so expensive is that there is a lot of demand for it. It’s used in modern nuclear weapons and so there’s a constant need to create and replenish the tritium supply. It’s also used in many different ways as an emergency light source.

With this constant demand, it’s no wonder that tritium could end up costing you about $30,000 per gram. This increased demand pushes up the price of tritium.

All-natural diamonds formed at least 990,000,000 years ago and can be as old as 3.2 billion years. While synthetic diamonds are getting more common, there is still a desire for natural diamonds that are rare and expensive to find.

Clear diamonds without any imperfections are more expensive. They are also expensive because of what people are willing to pay for weddings and engagement rings that are usually made with white diamonds.

Yes, the pink diamond gets its own special category here because it is about 20 times more expensive than a white diamond, making them one of the most expensive natural elements in the world. They are some of the rarest diamonds. 90% of the world’s supply of pink diamonds comes from a mine in Western Australia.

There are various hues of pink diamonds from a light pink to a fancy red. You can also find shades of brown, orange, and purple undertones. The more vivid the color, the more expensive the pink diamond will be.

Pink diamonds can cost about $1 million per carat. This price will increase if the diamond is clearer or the color is brighter. The fact that they are so rare increases their value.

Pink diamonds are especially expensive because they are a trend for celebrities and wedding rings. Ben Affleck gave Jennifer Lopez a pink diamond engagement ring of 6.1 carats worth $1.2 million. Someone in Hong Kong bought the Pink Star diamond, a 59.6-carat pink diamond, for $71 million.

Californium is the 2nd most expensive synthetic element in the world. It was first discovered in 1950 when they created 5,000 atoms of californium. Since then, scientists have only succeeded in producing 8 grams of Californium, only about half a gram produced every year.

Californium is a radioactive element that’s used in research and certain devices for use in the petroleum industry. For example, it’s used in portable metal detectors to find gold or silver or even to identify oil layers in oil wells.

Today, californium costs around $27 million per gram. That is significantly more than pink diamonds. As with all other elements, a reason for this is that it’s so rare and difficult to produce. We can produce only about half-gram of californium per year.

It also has sufficient demand because it’s used in industries that have the resources and the desire to spend money on californium for their own needs. The fact that californium can be used to detect gold and oil makes it a valuable resource.

Finally, the most expensive synthetic element is Francium at about $1 billion per gram. It is available in nature, but it’s so rare and decays very quickly. Scientists have started to create Francium in labs.

Francium is the least found metal on Earth and is rarely found in nature. About 300,000 atoms were the largest amount produced, so the idea of 1 gram of Francium is just theoretical.

Francium is used in research for curing cancers. Because of these applications, there is interest in seeing a glimpse of this rare element, making it a high-risk investment. Of course, it’ll disappear quickly since it’s a highly radioactive material with has a half-life of about 22 minutes.

What makes Francium so expensive? That’s because not only is it a rare element, but it also decays at a rapid rate.

So not only is it useful for important research, but it’s also extremely rare. It decays quickly making it difficult to collect and maintain. Scientists haven’t produced enough Francium to know what it looks like.

Splurge on the Most Expensive Elements

When the pandemic hit, 55% of American adults turned to gardening and lawn care to occupy their time. This green interest also carried over indoors, with many homeowners picking up houseplants left,...

Don't let anybody tell you that woodworking is dead. There are still 7,300 active woodworkers in the US, and that's not even mentioning thousands of other specialized craftspeople who work...