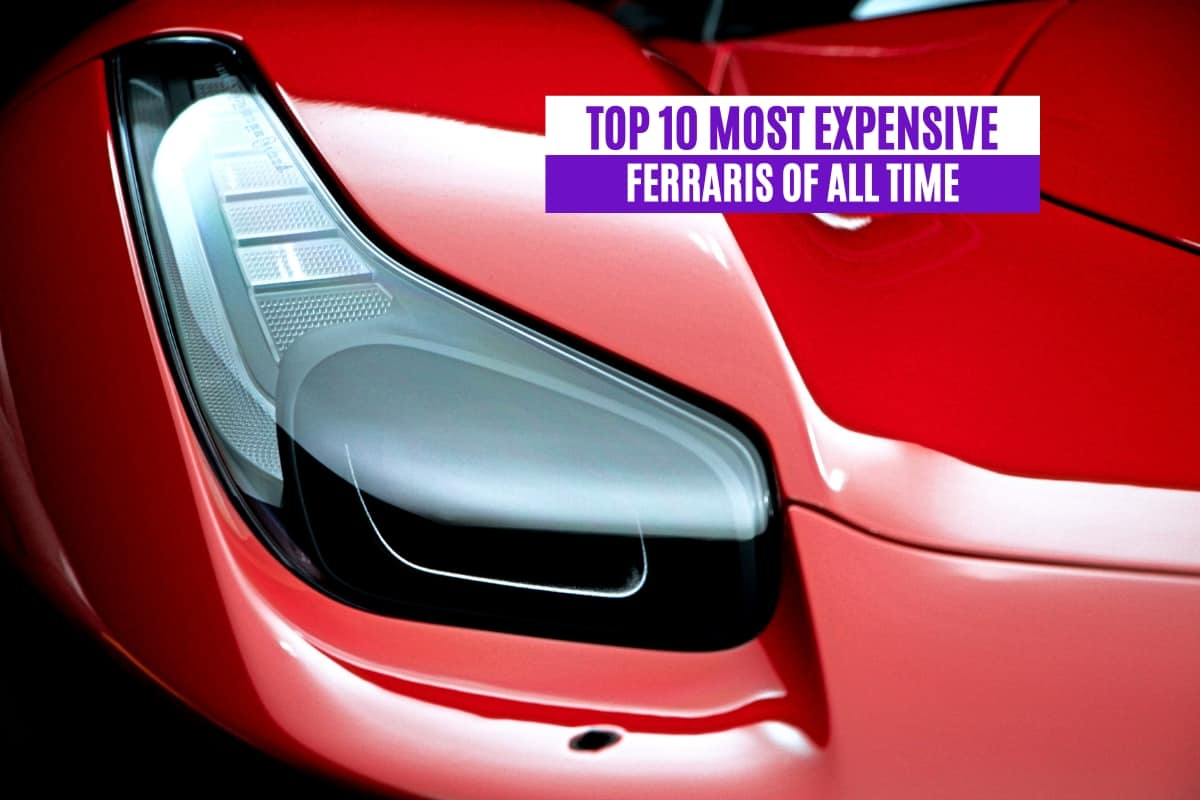 Ferrari is synonymous with speed and Italian luxury. Officially founded in 1939, the Ferrari automotive brand is one of the most iconic in the world, and many Ferrari cars are worth a fortune. But which of these cars is the priciest?

If you’ve been thinking of adding a high-value Ferrari to your collection, this ranking will offer the insight you need to select the most alluring (and costly) model.

Here Are the Top 10 Most Expensive Ferraris of All Time:

This sporty two-door convertible is undeniably stylish, but it’s also incredibly fast. The SWB California Spider is so special because it’s one of those rare cars whose value transcends its financial worth and it’s a very user-friendly car to drive. The scarcity and desirability have been steadily rising sale prices of these cars.

The specific version of this car that sold for such a high price in 2015 was once owned by French actor Alain Delon. It’s also comparatively rare, as it’s one of 37 California Spider SWBs released with covered front headlights.

Despite the fact that this specific vehicle was more than half a century old when it sold, it was in its original condition, having never been restored.

While this might have deterred some buyers, the fact that all its components are original might have boosted its value! And although this vehicle isn’t the costliest Ferrari, it’s still more valuable than the most expensive Porsche cars!

But some of these race-winning cars are more unique and notable than others.

For example, one of the vehicles responsible for making Ferrari a go-to choice for racing competitions is the 1954/1959 Ferrari 0432M. This one-of-a-kind vehicle features components from multiple Ferraris and has a notable history.

This mid-century competition car also has a distinct body design, with droplet-like front headlight panels that swoop upward around the front tires and a wide “mouth” at its front. The engine is a prototype for the infamous 250 GT, which might be why this vehicle managed to secure a win after racing the 1954 12 Hours of Hyeres event.

Even though this Ferrari was once a racecar, it’s enjoyed some notably luxurious updates throughout its lifetime. When it sold for $20 million in 2019, it featured red leather seats, polished dashboard dials, and a sparkling white-and-blue exterior.

The Ferrari Spider is one of the most sought-after vehicles in the world, regardless of its precise model and release year. After all, this vehicle set new competition records throughout the 1950s and 1960s, helping to build Ferrari’s brand reputation for producing lightning-fast racecars.

Because of this, it should come as no surprise that the 1955 Ferrari 410 Sport Spider is one of the priciest Ferraris on the planet. One cherry-red version of this highly coveted competition car (one of only two with these specifications with the intention of factory-based racing) even sold for $22 million when it went to auction in 2022!

This particular vehicle competed at the 1956 1000 KM Buenos Aires. Some of the most celebrated drivers, including Carroll Shelby and Juan Manuel Fangio, have sat behind the wheel of this Ferrari and helped it win multiple racing victories.

Naturally, this mid-century Ferrari 410 Sport Spider is a valuable piece of automotive history. It’s also part of designer Sergio Scaglietti’s legacy, as he helped build and design the car’s coachwork.

For perspective, the 1955 Ferrari 410 Sport Spider is pricier than the world’s most expensive McLaren supercars!

When it comes to valuable vintage and antique Ferraris, it’s almost impossible not to mention Sergio Scaglietti. This Italian designer helped design the iconic look of several Ferrari competition cars, including the 1964 Ferrari 275 GTB/C Speciale.

This Ferrari is superbly rare and exceptionally stylish, looking like a cross between a classic racecar and a luxurious consumer-friendly sports car. One of only three identical vehicles, the first-ever 1964 Ferrari 275 GTB/C Speciale fetched a jaw-dropping price when it sold for $26.4 million in 2014.

Considering this car’s high-performance components (including a V12 engine) and uniqueness, this high price isn’t entirely surprising. Still, the 275 GTB/C Speciale isn’t the costliest Scaglietti-designed Ferrari ever sold. But we’ll touch on that a little later.

Several of the most expensive Ferraris of all time are rare antiques that have enjoyed decades of high-quality maintenance and restoration work. The 1967 Ferrari 275 GTB/4S NART Spider is no exception.

At first glance, this vintage Ferrari might appear to be a standard sporty convertible. Its bright red exterior and black fold-down hood are eye-catching, but is it all that special?

The simple answer is yes! After all, only 10 of these cars were built and released.

A fully restored version of this classic car, once owned by a North Carolinian driver named Eddie Smith Sr., sold for a hefty $27.5 million when it went to auction in 2013. That’s hardly surprising considering the vehicle’s rarity, V12 engine, and Scaglietti design.

Simply put, this Ferrari has it all. It’s stunningly beautiful, capable of reaching competition speeds, and comfortable enough for everyday cruising. Notably, the NART Spider was the most technologically advanced Ferrari when it was released in 1967.

Consequently, this rare convertible is also an indelible part of automotive history. But while it’s important enough to belong in a museum, it was built to be enjoyed. We hope the current owner enjoys every moment of driving this exclusive Ferrari.

As soon as you lay eyes on the 1956 Ferrari 290 MM by Scaglietti, you know it was built for speed.

With a streamlined body and driver-side-only partial windshield, this competition car is a striking example of Ferrari’s mid-century engineering and design excellence. It’s also a Scaglietti-designed vehicle, making it inherently valuable and historically significant.

When you add this car’s racing history into the mix (including its run at the 1956 Mille Miglia), you only come away with more reasons to fall in love. After all, this Ferrari was once driven by famed competition driver Juan Manual Fangio!

It was built to compete with Germany’s event-winning Mercedes-Benz vehicles, with a V12 engine that helped it reach eyewatering speeds. Engineered by two of Ferrari’s most celebrated innovators, Vittorio Jano and Andrea Fraschetti, the 290 MM helped Ferrari rank first at the 1956 World Sportscar Championship.

Thanks to this competition car’s outstanding race history and innovative (at least, for the time) engineering, it sold for $28.05 million at auction in 2015. Chances are, if this car were put up for auction again today, it would sell for an even higher sum!

Ferrari sportscars have a reputation for being some of the fastest hot rods in the world. This reputation didn’t come from out of the blue. Instead, it was carefully curated by decades of competition wins.

As a result, many of the world’s most expensive Ferraris are racecars with illustrious histories.

Take the 1957 Ferrari 335 Sport by Scaglietti, for example. This competition car won the 1958 Cuba Grand Prix and competed in a laundry list of other mid-century racing events. Without it, Ferrari might have never been able to engineer its most infamous vehicle, the 250 GTO.

With coachwork by Sergio Scaglietti and Enzo Ferrari’s personal approval, the 335 Sport is a driveable work of art. For this reason, it’s bound to fetch high prices at auction. In fact, one of these cars (chassis number 0674) sold for $35.95 million in 2016!

This record-setting price makes the 1957 Ferrari 335 Sport by Scaglietti the most valuable mid-century Ferrari on the planet. To put things in perspective, this Ferrari is more valuable than the world’s most expensive Rolls-Royce cars.

There’s no question about it; the Ferrari 250 GTO is the most valuable model ever produced by the Italian automaker.

Initially created in 1962, Ferrari continued production of this vehicle until 1964. But its earliest versions tend to sell for the biggest bucks, including the 1962-63 Ferrari 250 GTO Berlinetta.

This competition car elevated the Ferrari name to new levels, competing in a litany of racing events throughout the early 1960s.

Once owned by Jo Schlesser, a French Formula One driver, this unique 250 GTO competed in the 1962 Tour de France Automobile. Although it didn’t secure first place in the event, it did enjoy a well-earned second-place spot.

It eventually passed through multiple hands, eventually becoming one of the most prized possessions of Italian racecar driver Fabrizio Violati.

Violati kept and maintained this 250 GTO for almost five decades. No other Ferrari 250 GTO has enjoyed such a long and dedicated ownership.

As you’ve seen, 1962 was a big year for Ferrari. This was the year the Italian automaker released the 250 GTO, a competition car that continually sells for incredible prices at auction nowadays.

With an aerodynamic body designed by Sergio Scaglietti, this early version of the 250 GTO set a new precedent within the racing competition scene.

It’s almost impossible to overstate this vehicle’s importance, as its competition wins are so numerous and drivers so beloved that you could fill an entire book with them. But because Ferrari only built 36 of these striking racecars, they’re incredibly rare nowadays.

This rarity is part of why they’re so valuable. Still, the most valuable 1962 Ferrari 250 GTO isn’t only a treasure because of its scarcity. It’s also a winner.

We’re talking about the 250 GTO that ranked first-in-class at multiple Targa Florio events in the early 1960s, won the 1962 Italian GT Championship, and earned more than a dozen wins throughout its time as a competition car: chassis number 3413.

This historically significant vehicle sold for $48.4 million when it went to auction in 2018.

This makes it almost double the price of other Ferrari 250 GTOs!

Purchased by David MacNeil, an American entrepreneur with a net worth of about $1 billion, the 1963 Ferrari 250 GTO held the title for the most expensive car in the world until May 2022.

It’s so exclusive and valuable that the few fortunate few who own one (or any Ferrari 250 GTO) are invited to participate in 250 GTO Tour events in some of the most luxurious locations throughout Europe. So, essentially, the price of this rare Ferrari comes with additional perks that continue for as long as you own the vehicle.

With a V12 engine that propels it to speeds of up to 174mph (about 280km/h), the 1963 Ferrari 250 GT was one of the fastest and most impressive competition cars of its time. The model purchased by MacNeil also holds the honor of being the winner of the 1964 Tour de France Automobile.

In the unlikely event that MacNeil ever decides to depart with his unbelievably expensive Ferrari, it could end up selling for $100 million or more.

What’s the Most Expensive Ferrari of All Time?

The most expensive Ferrari of all time is the 1963 Ferrari 250 GTO. Fewer than 40 of these cars were made between 1962 and 1964, making them some of the rarest Ferrari sports cars in the world.

Originally built for racing competitions, the Ferrari 250 GTO has a minimalistic interior and is equipped with a powerful V12 engine. But despite its lack of an opulent cabin, one of these stylish two-doors sold for $70 million in 2018!

Discover more about the world’s most expensive and luxurious lifestyle experiences and items by checking out these related articles now!

Rolls-Royce was founded in 1906 and quickly became synonymous with wealth and affluence. Each Rolls-Royce vehicle is bespoke, and no two Rolls-Royce cars are exactly alike. But which of these...

The Porsche name is associated with speed, luxury, and wealth. But while the average Porsche vehicle sells for between $60,000 and $120,000, some Porsche cars are worth millions. If you're a fan of...