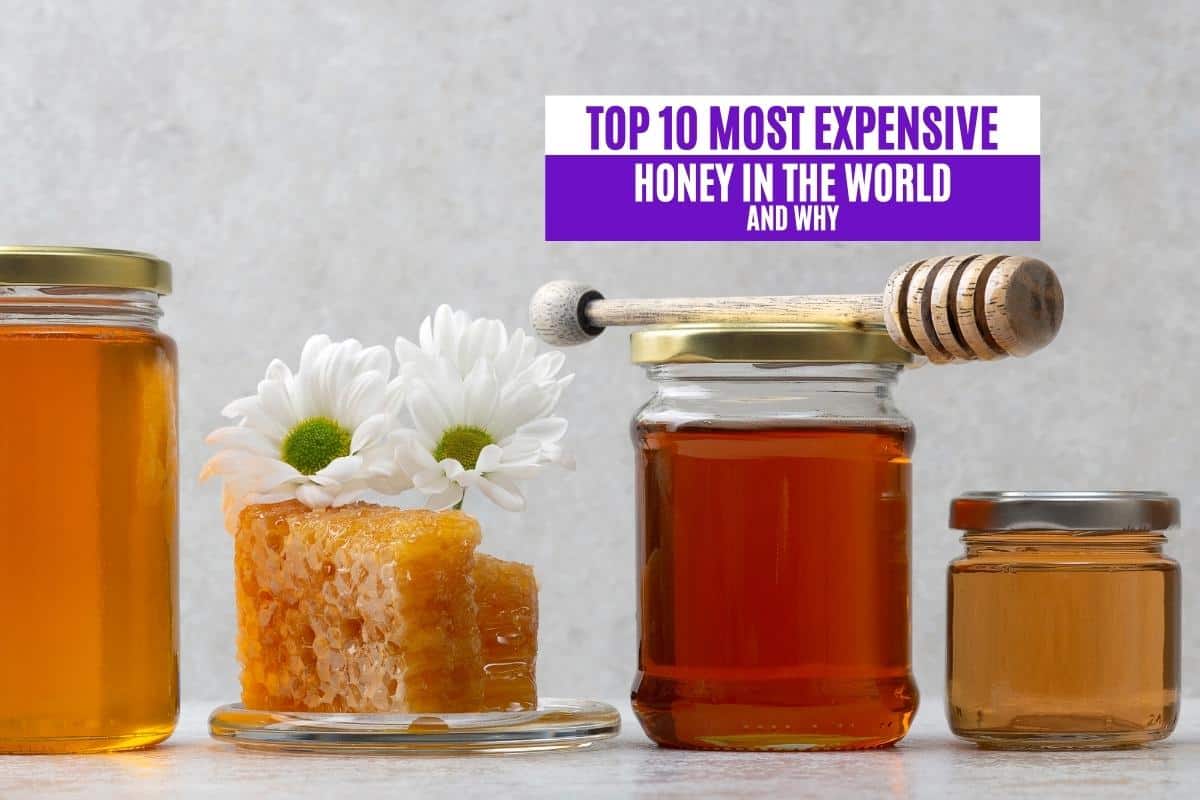 Did you know that the most expensive honey in the world is $10,500 a kilogram? That’s almost $160 per tablespoon of honey!

What separates honey from all over the world is the kinds of bees vegetation, what plants they pollinate, and how the honey is harvested. With nearly half a million plants species and 195 countries, you can see just how diverse each region’s honey can be.

All of these factors determine the potency and scarcity of a honey and ultimately the price. Here we discuss the best honey in the world and what it will cost you to get some.

Chestnut honey comes fro the Galician Mountains. These are also referred to as the Galacian Massif. They are a part of the Iberian peninsula which encompasses Spain, Portugal and areas of Southern France, Andorra, and Gibraltar.

The antibacterial properties of chestnut honey fight disease and acne. Atioxidants in chestnut honey are very effective at combating wrinkles and aging of the body. Chestnut honey is also an effective cleanser, making it good for the liver, heart and eyes.

Miel Lo Mejor del Bierzo originates from Europe in the province of Leon situated in Spain. The honey is produced in the Spanish village of Camponaraya, in the district called El Bierzo, hence the honey’s name.

The honey is so popular it has a waiting list, which only inflated the price even further.

The bees in this region feed on flowers in the Leon region. They produce a very limited supply of honey about twice per year. It is not only recognized for its price.

Because bees in this region feed on flowers, the honey has an exquisite floral flavor and was awarded distinctions in flavor. Raw honey is a powerful medicine but it is much easier to consume when it also tastes delicious.

Acacia honey stems from the nectar of bees that pollinate the black locust tree. These trees are native to North America and Europe.

The black locust tree is actually a “false” acacia tree and is where the honey gets its name. In the U.S. these trees grown from Pennsylvania through the Appalachians and westward.

Theh high fructose content of Acacia honey prevents it from crystallizing and therefore it lasts longer. It also accounts for the notably sweet flavor of Acacia honey.

It is also the least allergenic of honey varieties. It is said that if you suffer from sinusitis, to consume honey from your local region as it will build your immunity to local pollens. Of course, always consult a doctor first.

The bloom period of Black Locust trees is only about ten days. This contributes to the scarcity, and thus higher price of Acacia honey.

Unlike most honey, Acacia has a very mild flavor. It is easy to use in drinks and recipes.

Ikaria is a small Greek island located off the Aegean sea. It is one of the earth’s Blue Zones. There are five blue zones in the entire world.

Blue Zones are regions where the quality of life and life expectancy far outperform global statistics. One in three people in Ikaria lives to their 90s. Could it be something in the Ikaria honey?

Ikaria honey is produced on an island, which already increases the cost. The bees of Ikaria only feed on the medicinal herbs, pines, and flora of the well-soiled island. This honey has been called the “secret of longevity.”

The Anzer flower is native to Turkey. The Anzer valley is unique in that it is a hill of plateuas. In this vast land there are 90 varieties of endemic Anzer of the 500 existing species.

Anzer honey is extremely rare and in some cases the harvest oly produces limited amounts, making the already precious honey even more costly. It is considered a medicinal honey as the 500 plant varieties bees pollinate from transfer powerful nutrients into the raw Anzer honey.

The Tualang tree is native to Asia and one of the tallest trees measuring in at 289 feet on average. Indonesia, Malaysia, the Philippines, and Thailand all have Tualang trees that act as a shelter to the Apis dorsata bee.

This bee thrives in Jungle habitats and feeds off jungle flowers.

Because the Tualang tree is so tall, bees build their honeycomb nests on the top branches. This protects the nests from predators. It also makes the process of extracting the honey laborious.

The trees have notoriously slipper roots too. Only skilled climbers can get to the top where they have to deal with the abnormally large size of the Apis dorsata bee.

Tualang honey outperforms other honeys in many nutrient concentrations. It has higher antioxidants, phenolic acids, and a higher moisture content than other honeys.

Sidr honey is harvested from Yemen’s Hadramaut Mountains. It is produced by bees who pollinate and feed on plants surrounding the Sidr tree. Sidr trees are native to Yemen and Saudi Arabia.

Sidr honey has a steep price of $1,000 a kilo because it is harvested from a rare tree. The harvest only happens twice a year, which creates less supply and also increases the price.

The Sidr tree is also referred to as the Lote tree which is nicknamed “the tree of life.” It was common to consume this honey by Muslims because it and the benefits of honey are mentioned in the Quran.

It is considered nature’s life-enhancing medicine and is especially expensive when exported.

Of all the expensive honey varieties on this list, Manuka is the most common. But here we are talking about a specific kind of Manuka honey, 32+ UMF Limited Reserve Manuka Honey. When it comes to Manuka honey, it is only produced in Australia and New Zealand.

Other honeys are rated with UMF or MGO. MGO measures methylglyoxal content. Methylglyoxal is responsible for the antibacterial effects of Manuka honey.

UMF stands for Unique Manuka Factor. It measures the chemical compounds, methylglyoxal, but also DHA and leptosperin. A minimum UMF of 10 is expected for potency and effectiveness of Manuka honey.

This Manuka Honey even comes with a certificate of authenticity. In order to obtain an IAA, UMF, or MGO rating (the three grading ties for Manuka honey) the honey must be tested in a lab.

This helps set the price and market the proper grading to consumers. Manuka honey is said to have powerful antibacterial and antiseptic properties.

Elvish honey has in the past at times been more expensive than gold. This Turkish honey is unique since it is extracted from caves, not hives. Typically beekeepers will harvest honey two to three times a year during bee season.

Elvish honey instead is freely harvested by bees once per year in a 1,800-meter deep cave. The cave is located in Northeastern Turkey within the Saricayir valley of Artvin city.

The family of a local beekeeper, Gunay Gunduz, noticed bees swarming into a nearby cave in 2009. Curious, they asked for the assistance of professional climbers and entered the depths of the cave. As they suspected, they found honey plastered all over the expansive walls of the cave.

To be safe, they sent a sample of the 18 kilograms of honey to a lab in France that analyzed the sticky substance. The Gunduz family was in for great news.

What they discovered was seven-year-old mineral-rich honey. The stone of the cave infused this honey with plenty of beneficial minerals.

Since then the honey is sold bottled, but still at a very steep price. The price is equivalent to an apartment or car for some.

The most expensive honey is sold every year, so someone out there is able to justify the price. Elvish honey is known for its distinct dark color and bitter flavor, but flavor alone does not do the selling.

Elvish honey is considered a powerful medicine. The honey is harvested in a cave instead of hives which infuses it with rare essential minerals. The bees in this area also feed on endemic medicinal plants of northeast Turkey.

Gunduz says the unique harvesting method once per year, in the cave that requires a team of climbers to source, scarcity available, unique medicinal properties, and labor in capturing all amount to the high price tag.

Centauri Honey (Turkey) has broken the world record to become the most expensive honey in the world, selling for €10,000 per kilo ($10,800 per kilo) according to Guinness World Records. The honey looks like a magical elixir in an exclusive handcraft bottle from a faraway land.

Centauri Honey receives rigorous lab testing by sending every bottle to the Turkish Scientific Council for an evaluation report.

There are many reasons why Centauri Honey is so expensive. The location of the cave is far away from any human residences and 2,500 meters above sea level, which means hiring professional climbers is essential to harvest the honey.

Unlike most other commercially produced honey which can be harvested 2-3 times a year, Centauri Honey can only be harvested once a year. The high altitude makes the honey even harder to produce and look after bees to ensure the best quality.

The bees feed on the medicinal herbs planted around the cave so Centauri Honey has strong medicinal properties because it’s high in potassium, magnesium, phenols, flavonoids, and antioxidants. The Centauri Honey provides amazing effects to improve general health and potentially help to slow the aging process.

Centauri Honey is considered as liquid gold and carries a hefty price tag of $10,500 per kilo. But the high price tag didn’t seem to put any buyers off, orders are still pouring in, even though the delivery time for some of the Centauri Honey like Centaurian Diamond is close to 6 months.

Top 10 Most Expensive Honey Varieties in the World

If you think the honey you are having is fancy, think again. Some of the honey in this list is incredibly exclusive and so powerful they are one of nature’s most potent medicines. Here is the list of the top ten most expensive honey varieties in the world:

link to Top 10 Most Expensive Colognes Money Can Buy

When most people think of "expensive" cologne, they're likely thinking about the higher-end department store cologne. What most average Americans don't know, however, is that there is a whole world...

Gold has been prized since ancient times, and its value has only increased. As such, several of the world's most expensive items are made of this precious metal! But what are the most expensive gold...