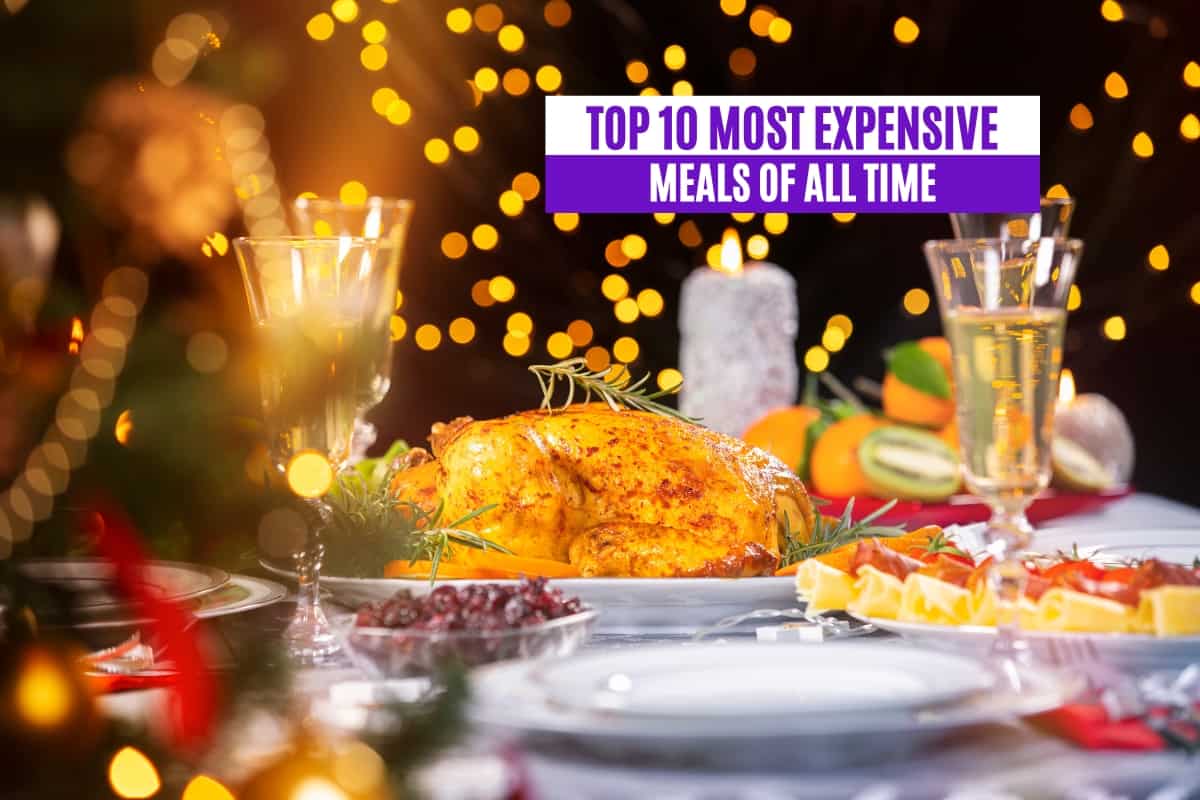 The average meal at a restaurant only costs about $15, but prices can be much higher (or lower) depending on where you decide to dine. Some lunch and dinner options can even set you back several thousand dollars! But which meals are the costliest, and what makes them so pricey?

The most expensive meal of all time is Warren Buffett’s Final “Power Lunch.” This meal was auctioned for $19 million in 2022. In addition to lunch at Smith & Wollensky in New York, the winning bidder got to enjoy some private time with Warren Buffet, one of the wealthiest investors in the world.

After browsing these high-priced meals, your stomach will be rumbling for more!

Here Are the Top 10 Most Expensive Meals of All Time:

If you’re looking to dig into some of the most expensive sushi, you won’t want to miss out on the Hinoki Counter Experience at New York’s Masa restaurant.

This two-hour-long dining experience will allow you to get up close and personal with the Masa sushi chefs. It’ll also ensure that you’re the first to receive your sushi courses, resulting in cuts that are the ideal flavors and textures. Of course, you’ll need to invest $950 per person for this top-level treatment.

And before you reserve your counter spot at Masa, be aware; the Hinoki Counter Experience doesn’t include drinks. A bottle of wine can easily add another few hundred bucks to your meal’s total price.

Exclusivity, high-quality ingredients, and world-class culinary skills are the main reasons behind the Hinoki Counter Experience’s incredible price. But although this sushi experience is just shy of $1,000, it’s far from the most expensive meal money can buy.

Ibiza is known as one of the ultimate party destinations. But after dancing the night away at one of the island’s most infamous nightclubs, you’ll probably need a satisfying meal to help you recover.

If you’ve got the funds, you might want to opt for the Sublimotion Fine Dining Experience. Though this experience costs $1,740 per person, you’ll enjoy 20 courses in a neo-futuristic science-fiction setting. This meal is so unique that it’s one of the few to have scriptwriters!

This meal includes the handiwork of 25 professionals (chefs, servers, DJs), and it consists of almost two dozen courses. Considering the atmosphere and high-quality dishes, $1,740 might be on the cheaper end of the spectrum for this experience.

In 2022, up to 20 lucky (and well-to-do) diners got to whet their appetites with the $10,000 Harlan Estate Wine Dinner. This multi-course dinner, hosted by the Wynn Las Vegas, was more of an experience than a meal.

The $10,000 per-person ticket price included amenities such as:

Still, for that price, you could afford to chow down on some of the most expensive burgers! Of course, a decadent burger can’t really hold a candle against the Harlan Estate Wine Dinner’s six-course meal and included hotel room.

The cost of the Harlan Estate Wine Dinner included so many extras that would be costly on their own that it’s no wonder the ticket price was $10,000. Besides, with a limited guest list of only 20 people, this dining experience was one of the most exclusive in Las Vegas, making it naturally attractive to Sin City’s wealthiest diners.

Few meals come with expensive jewels, but The Fortress Stilt Fisherman Indulgence is a rare exception. This dessert (available only upon request) features an 80-carat aquamarine gemstone that diners can pocket.

It also costs $14,500, so it’s a good thing that chefs don’t expect you to return the stone after enjoying the handmade chocolate sculpture and Baileys Irish Cream cassata.

The skill required to create this dessert means that only the world’s most talented chefs can attempt it. But apart from the labor required to create The Fortress Stilt Fisherman Indulgence, the main reason behind its higher-than-average price is its whopping aquamarine stone.

The Grand Velas Resort in Cabo San Lucas is a fantastic place to enjoy some pampering and seaside relaxation. But did you also know it’s the home of the world’s most expensive taco?

Named after the resort that created it, the Grand Velas Taco (available at the on-site Frida restaurant) costs $25,000. That’s only about 5,000 times pricier than the average taco!

Of course, this taco features far more refined ingredients than the ground beef and shredded cheese typically featured in tacos.

The Grand Velas Taco comes packed with melt-in-your-mouth Norway lobster (also called langoustine), Almas Beluga caviar, and brie cheese infused with black truffles. And those are only a few ingredients that make this meal a true treat for the wealthiest taco lovers.

Every aspect of the Grand Velas Taco is exquisite, from its gold-infused tortilla shell to its tequila-based salsa.

These ingredients are expensive, and they’re the primary reason why this meal is so costly. Of course, it could be even costlier (by about $150,000) if you decided to add the optional bottle of Ley.925 Pasión Azteca Ultra Premium Añejo to your meal.

Before you say, “A cannoli isn’t a meal,” hear us out.

Yes, the average cannoli is more of a dessert or a snack, capable of satisfying your sweet tooth but not necessarily filling your belly. But The Golden Cannoli, created in 2011 by Jasper’s Italian Restaurant in Kansas City, Missouri, is a bonafide meal.

Not only was this cannoli the size of a burrito, but it was filled to bursting with cream and lovingly decorated with chocolate chips. It was also gilded in edible gold leaf! But this sweet meal, which cost $26,000, also came with a bottle of 1999 Louis Roederer Cristal Champagne and a Tom Tivol diamond necklace,

If you’re okay with going without the necklace and champagne, you can order The Golden Cannoli for as little as $50 the next time you’re in Kansas City.

The original Golden Cannoli was expensive because of the included diamond necklace and bottle of vintage champagne.

The consumer-available version (that doesn’t include these added items) is a little easier on the wallet. However, the gold leaf used to make it still produces a hefty dessert that costs far more than the average Italian treat.

People in the United States have been celebrating Thanksgiving since the late 1700s. But in all that time, there’s never been a pricier or more mouthwatering Thanksgiving meal than The Thanksgiving Feast produced by Old Homestead Steakhouse in New York.

In addition to saving you the time and effort and cooking Thanksgiving dinner yourself, this meal offered diners the chance to enjoy:

The bourbon-based gravy was also a decadent touch, as each tiny drop poured onto the delicately roasted turkey likely cost somewhere in the region of $6 (both of the included gravy boats reach a total value of almost $3,000).

Nearly every part of The Thanksgiving Feast featured imported ingredients or lavish concoctions made using pricey liquors. Consequently, the final price was a culmination of all the base costs of the different entrees, sides, and desserts.

It’s also worth mentioning that preparing this meal took a lot of time and skill. As such, the labor costs associated with making The Thanksgiving Feast likely boosted the price tag to its $50,000 point.

Pizza is one of the most popular and affordable meals. But it can also be ridiculously expensive. That’s certainly the case for the $70,000 pizza that YouTube sensation MrBeast (Jimmy Donaldson) ordered in February 2020.

This custom-made pizza featured a dazzling array of luxury ingredients, from a gold-covered dough base to imported white truffle shavings and caviar. Because this saucy pie, one of the most expensive pizzas in the world, was made by a private chef for MrBeast, you won’t find it on any menu any time soon.

The amount of gold used to create this pizza is one of the primary reasons behind its incredible final price. But it also featured ingredients marinaded in expensive fruit juices, high-quality Japanese beef, and aged bechamel sauce. These also contributed to this pie’s high value.

There’s also the fact that this pizza was created by a private chef specifically for MrBeast. As you might imagine, hiring a chef to create a luxury-quality pizza on your behalf isn’t cheap!

You can watch MrBeast and Co. chow down on this unique pizza by checking out this video. But be warned, after seeing these YouTube stars enjoy the decadence of this pie, you might find yourself feeling more than a little hungry.

In 2016, CÉ LA VI Singapore announced that it would offer something called The $2 Million Dining Experience. As the name implies, this meal cost a whopping $2 million! It also included a lot more than a fancy dinner.

The $2 Million Dining Experience consisted of two days’ worth of lavish experiences, including:

The final gem (literally) of this dining experience was the Jane Seymour Vivid Blue Diamond Ring, which diners got to take home with them (in addition to the diamond-covered chopsticks).

Unfortunately, this $2 million dinner was a once-in-a-lifetime opportunity due to the inclusion of the Jane Seymour Vivid Blue Diamond Ring. So, if you’re looking to invest, you’re too late!

Considering everything included with this meal, from the chauffeur services to the rare diamond ring, the $2 million price might have been a bargain. After all, how often does a dining experience come with a cruise, multiple dinners, and jewels?

The most expensive meal is Warren Buffet’s Final “Power Lunch,” a private lunch auctioned on eBay in 2022. The winning bidder spent $19 million for the opportunity to dine with Buffet at the New York City steakhouse Smith & Wollensky.

Of course, it’s crucial to note that the funds paid for this lunch didn’t go directly to Buffet, who likely doesn’t need them considering his $100 billion net worth. Instead, they went to the GLIDE Foundation, a charity organization based in San Francisco.

Hopefully, the $19 million covered the cost of lunch, as meals at Smith & Wollensky aren’t cheap. We’re looking at you, the Wollensky’s Grand Bouquet (which costs almost $150).

The chance to dine with one of the world’s wealthiest people rarely comes along. The fact that this particular “Power Lunch” was the last one Buffet intended to hold makes it even more valuable.

What would you spend to be able to chat with a man whose net worth is in the billions? Well, if you’re like the anonymous winner of this meal’s auction, the answer is $19 million.

What’s the Most Expensive Meal in the World?

The most expensive meal in the world is the one Warren Buffet auctioned off in 2022. This private lunch, featuring Buffet himself, sold for a jaw-dropping $19 million on the popular auction site eBay.

Though this wasn’t the first meal-based encounter Buffet auctioned, it is his last. This quality might have helped the bidding war reach new heights, as it was the public’s final opportunity to score a private meal with one of the world’s wealthiest CEOs.

Check out these related articles to learn more about the world’s most expensive foods and beverages!