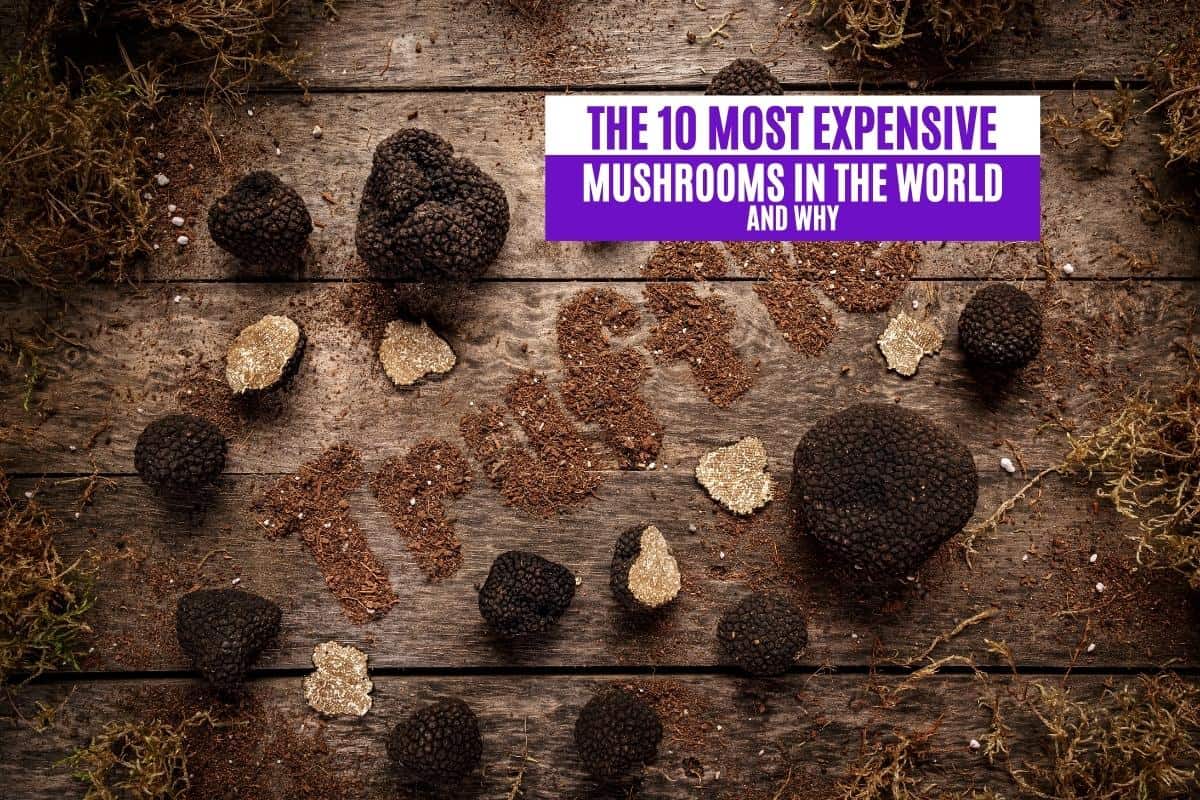 But, what makes these mushrooms so desirable? Take a look below, to discover why they’re unusually valuable.

Enoki mushrooms are easy to cultivate and have a mild flavor. They are most commonly used in East Asian cuisine, where they’re often added to soups or stir fries.

They’re an affordable luxury in the USA where they’re sold fresh and dried for use in soups and Asian-style dishes.

They are long, thin, cream-colored mushrooms that become soft and noodle-like when cooked.

These mushrooms are very easy to grow so other factors affect their prices such as demand and production. In a town with no producers nearby, their costs in a typical grocery store include transport expenses.

Why Are Enoki Mushrooms Expensive?

In larger cities and areas with an Asian population, these mushrooms are inexpensive and widely produced. However, in more remote US cities with smaller Asian populations it’s a different story. Enoki mushrooms can fetch high prices and may even only be available locally dried.

9 – Kalahari Truffles from Namibia ($10 per pound)

Have you heard of the Kalahari Truffle? It’s a type of mushroom that grows in Africa. This fungus is not as rare as some of the others on this list, but it still commands a high price due to its unique flavor. It grows wild in the desert and knowledgeable locals harvest it and sell it.

To serve them, locals boil them and then eat them with salt. Some recipes call for frying the mushrooms, but most locals just boil them to preserve their flavor. They may also boil them, cool them, and then fry them with butter.

These truffles are cheaper than their European cousins because they grow in sandy ground and require no investment to grow. There’s some fear that they might be declining in number due to overharvesting or changing regional agriculture practices.

Why Are Kalahari Truffles Expensive?

For locals in Namibia, they are free! People forage for these mushrooms and they grow wild.

But, their cost in other countries varies. Transportation expenses for these delicious and increasingly rare mushrooms can inflate prices. Within Africa, they sell for approximately $10 per pound.

Believed to have health benefits, Shiitake mushrooms are cultivated all over the world. These mushrooms are available fresh, dried, or in a powdered form. They have a meaty texture that makes them a popular substitute for meat in vegetarian dishes.

Chefs prepare shiitake mushrooms in many different cuisines, most notably Chinese and Japanese. They are also a popular ingredient in European cuisine.

Dried Shiitake mushrooms cost around $20 per pound, while the fresh variety is only about $12 per pound. So why are they so expensive? They’re one of the most popular culinary mushrooms in the world. They are a chief component in a wide variety of dishes.

Why Are Shiitake Mushrooms Expensive?

Shiitake mushrooms are most popular in Asian cuisine, but they’re also used to flavor soups and stews throughout the world. You can but them both fresh and dried at most large grocery stores across the US. They are commercially grown in the USA and it’s easy to do so.

Lion’s Mane mushrooms are so rare in the US that they are more often purchased dried. Foragers with mushroom expertise in the North of America do sometimes find them and harvest them out in the wild.

Lion’s Mane mushrooms are cooked with other ingredients such as oysters or chicken or used as a substitute for crabmeat. They have a seafood-like, delicate flavor and are most often found in soups and stir-fries.

Interestingly, in the USA Lion’s Mane mushrooms are getting a reputation for medicinal use. However, in other countries, they are mostly used for culinary purposes.

These fungi have toothed tendrils instead of gills like most mushrooms, and are said to taste like lobster. They’re most commonly used in soups, but chefs also add them to other dishes.

Why Are Lion’s Mane Mushrooms So Expensive?

They are a more rare type of mushroom which is not commercially produced at scale. Although they potentially could be commercially farmed in the future.

They are often sold seasonally in the US and their price ranges widely depending on quality and quantity sold. You can even grow your own!

6 – Cultivated Morel Mushrooms from the US ($35 per pound)

Morels are a type of wild mushroom that can be found all over the world, but they most commonly grow in North America. They have a unique nutty flavor and are often used in French cuisine.

Morel mushrooms look like a sponge. You can find them in a variety of colors including black, white, yellow, and even red. They grow during the springtime when the weather is cool and often rain is forecast.

You must cook morels before eating them, which means they’re most commonly served in soups or as a side dish. People also turn them into a powder and used to flavor other dishes like meatballs!

Morel mushrooms are one of the most expensive mushrooms in the world, with a price tag of around $35 per pound. This is due to their scarcity and difficulty to cultivate.

Why Are Morel Mushrooms So Expensive?

These mushrooms are most popular during springtime when they start growing out of the ground again after winter has ended. This is also when most foragers are looking for them.

They’re difficult to cultivate and most are harvested from the wild, making them a more expensive option at the grocery store.

Large-scale commercial cultivation has begun in the USA. It brought prices down. However, because the perception is still that morel mushroom prices should be high, producers can still charge a lot for them.

Chanterelle mushrooms are a type of wild mushroom that can be found all over the world, but they most commonly grow in temperate forests. They have a unique fruity flavor and are often used in French cuisine.

Chanterelle mushrooms are often paired with poultry or fish dishes. They can also be used in soups, sauces, or stews.

They’re also one of the most expensive mushrooms in the world, with a typical bag of dried chanterelle mushrooms from a speciality food store costing $50.

Why Are Chanterelles Mushrooms So Expensive?

Chanterelle cultivation has begun in the USA and commercial production, however, much like with morel mushrooms, producers can charge a premium. This is because they were rare and mostly harvested from the wild until recent years so their price is tied to consumer perceptions.

Next on our list are black truffles from Italy. These fungi are highly sought after by chefs for their unique flavor and aroma. They can be used in a variety of dishes, from pasta to risotto to eggs.

Black truffles are the most expensive type of truffle, with a price tag that can range from $100-200 per pound. This is due to their rarity and the difficulty in harvesting them.

Why Are Black Truffles So Expensive?

Black truffles are most commonly found in Italy, where the climate and soil are perfect for their growth. They’re difficult to find and harvest because they grow underground near tree roots.

Truffle hunters forage for them with pigs, dogs and tools. They cannot be cultivated and are therefore very rare.

Next on our list is the White Truffle, similar to its black cousin. It is a little different in flavor, but just as delicious.

White Truffle is often added to dishes to give them an extra boost of flavor. Chefs add white truffle shavings to a dish or a sauce. Preserved white truffles are available at most gourmet food stores and can also be purchased online.

White Truffles are most commonly found in the Piedmont and Lombardy regions of Italy, where they grow underground near oak and hazelnut trees. They’re also one of the most expensive foods in the world, with a price tag of $350 per pound!

Why Are White Truffles So Expensive?

Like black truffles, white truffles are difficult to find and harvest. They develop under scrub and rotting leaves, near tree roots, and must be foraged for, by pigs, dogs, and specialists.

They can’t be cultivated so they’re extremely uncommon. The larger and higher quality the black truffle is, the more it’s worth.

Matsutake mushrooms are most expensive in Japan because they’re most prized there.

They grow in most temperate regions of the world but the most sought-after ones come from Japan. Japanese people consider matsutake mushrooms an important part of traditional cuisine and culture.

These mushrooms are especially beloved for their unique flavor and aroma, which is often compared to cinnamon or cloves.

In Japan, the mushrooms can fetch a high price of up to $1000 per pound and a punnet of just 8 mushrooms can cost as much as $500.

Why Are Matsutake Mushrooms So Expensive?

Other countries do not prize this mushroom in the way Japan does. The prices are a reflection of Japanese culture, more so than a universal value. It’s also a very difficult mushroom to cultivate so most of the matsutake mushrooms found in the world are from Japan.

What is the most expensive mushroom in the world? It is the Yartsa Gunbu, also known as Cordyceps Sinensis. This fungus grows out of the heads of host caterpillars in the high altitudes of the Himalayas and Tibetan plateau.

This somewhat gruesome fact has not stopped this fungus from becoming one of the most expensive in the world. A pound of Yartsa Gunbu can fetch up to $5000 on the black market, with a single mushroom selling for as much as $200!

This is most likely because it’s a highly prized ingredient in traditional Chinese medicine, where it is believed to be an aphrodisiac and cure for many ailments.

Why Is Yartsa Gunbu So Expensive?

First, it is most commonly found in Nepal, a country that is remote and not so easy to reach, so transportation costs inflate the price of this mushroom overseas.

Secondly, most people think of mushrooms as food (which this one isn’t). It’s reputed to be a cure-all in traditional Chinese medicine, which drives up the price. It’s also linked to heavy metal poisoning.

The CFDA (China Food and Drug Administration) has heavily regulated it since 2016 due to concerns about it containing high amounts of arsenic and other heavy metals.

The Most Expensive Mushrooms In The World

So there you have it, that concludes our list of the most expensive mushrooms in the world.

Are you interested in trying an exciting and luxurious mushroom dish? Maybe adding some shaved black or white European truffle sounds perfect? We’re not 100% sold on the Yartsa Gunbu fungus that infects a caterpillar host and then feeds on its body, though.

While most of us will never get to taste these rare delicacies, they are fascinating nonetheless. Would you like to try any of these mushrooms? Perhaps you already have?