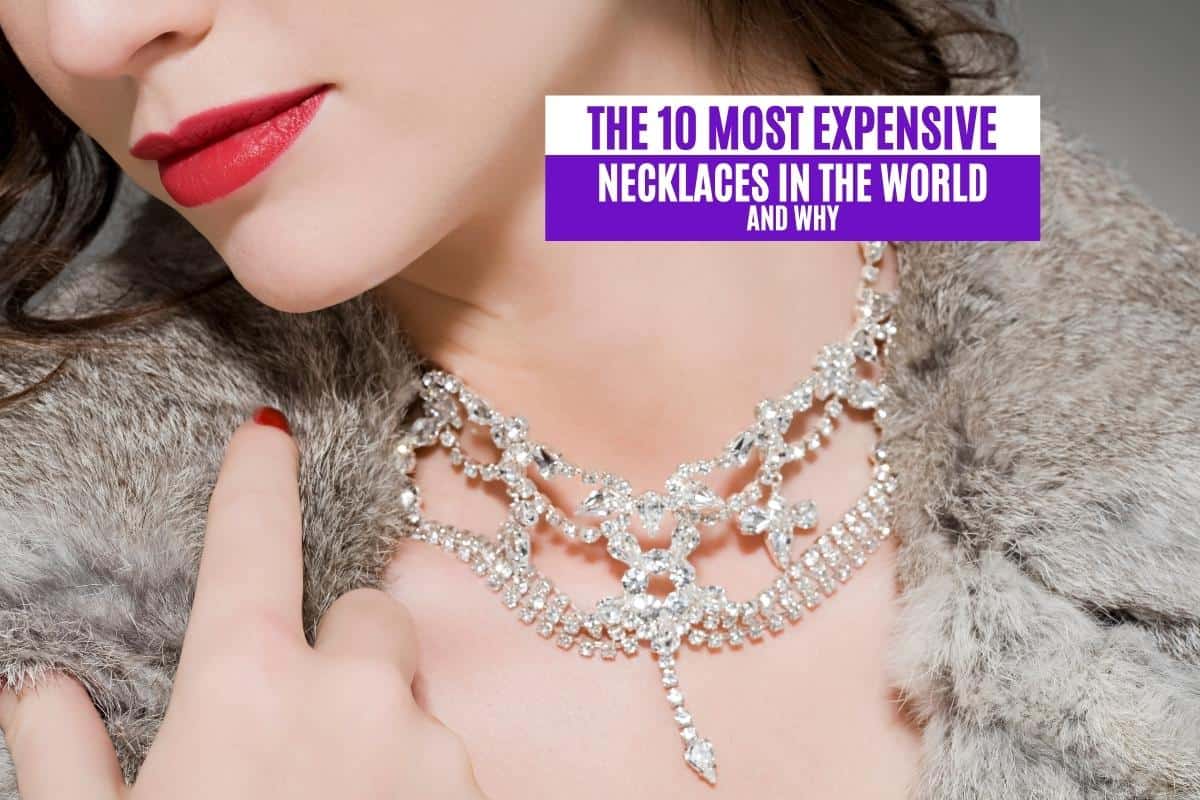 In 2021, beloved pop singer Beyoncé became the fourth woman in history, and the first Black woman, to wear Tiffany’s famous Empire Diamond. The necklace is one of the most iconic pieces of jewelry on earth, and Beyoncé’s association with the gem has raised it to mythological status. Even so, the 128.54-carat diamond necklace is not the most expensive necklace in the world.

What many people do not realize about historical jewelry and gemstones is that they have inherent historical value. Many of the stones featured in the world’s most expensive jewelry are incomparably rare. When talented jewelry designers add their touch to the gems, their worth becomes unimaginable.

A broad combination of factors contributes to the fiscal and emotional value of these one-of-a-kind necklaces. Designers, celebrity status, rarity, and size all impact the price tag of each one-of-a-kind wearable artwork.

Here are the Top 10 Most Expensive Necklaces in the World:

The tenth most expensive necklace in the world is The Heart of the Kingdom Ruby Necklace. At its center, the necklace has a 40.63-carat heart-shaped ruby. 150 diamonds, collectively weighing 155 carats, surround the central stone.

This necklace is expensive strictly due to the rarity and craftmanship that has gone into its central ruby. Rubies are some of the rarest gemstones on earth. Gem quality rubies, such as the Heart of the Kingdom ruby, are even rarer.

Red stones are the rarest color found in nature, and consistently fetch higher prices than emeralds and sapphires. The Heart of the Kingdom is a classic Burmese gem-quality ruby, making it one of the finest and most singular stones in existence.

Rubies are second only to diamonds in terms of strength. This makes them challenging to cut. The craftsmanship that went into cutting the ruby into a perfect heart contributes to its value.

The ninth most expensive necklace in the world is The Peacock Necklace. It has 21 of the highest quality Kashmir sapphires, totaling 109.08 carats. The largest sapphire weighs an unprecedented 10.56 carats, which is an unnaturally large size for the rare and precious stone.

Finding sapphires is a long game, as high-quality blue gemstones are exceedingly rare. It took the designers one hundred years just to gather the stones to create this one-of-a-kind art piece. The mine the sapphires came from became depleted in 1887, making gem-quality stones of its caliber scarce.

There is no other piece on earth containing this quantity of the rare gemstone. By the time the designer sourced the final stone, it took another fifteen years to complete the necklace.

While the necklace in the film Titanic is fictional, the Winston version is very real. It features a rare 15-carat blue diamond as its centerpiece. Diamonds will sometimes turn blue due to the presence of boron during their creation, but the conditions must be perfect to achieve such a clear and vivid color.

The piece now has some historical value, too. The actress Gloria Stuart, who played the elderly Rose in the Titanic film, wore the necklace to the Academy Awards in 1998.

The seventh most expensive necklace in the world is the Hutton-Mdivani Jadite Necklace, which features some of the rarest jadeite beads on earth. It features 27 flawless jadeite beads, valued at $3 million per carat.

It was originally owned by the famous “Poor Little Rich Girl,” Barbara Hutton, heir to the Woolworth fortune. Its historical significance adds to its hefty price tag.

The sixth most expensive necklace in the world is The Empire Diamond necklace. It features a 128.54-carat D color flawless diamond. It is the largest diamond ever sold by the Tiffany Company.

In addition to the empire diamond, the platinum and diamond necklace contains 180-carats worth of the world’s most perfect diamonds. It is one of the most iconic styles of diamond necklaces in history.

The Empire Diamond has traveled the world. It came from a mine in Botswana, then traveled to Israel for cutting. The stone was finally set in New York City.

The cost of the necklace includes on-demand service from a Tiffany jeweler, who can remove the diamond from the necklace and set it into a ring at the owner’s request.

The uncut diamond was 287.42-carats and could have been larger. When Tiffany acquired it, he decided to choose a cut that would emphasize its color above its size.

The yellow diamond is unique in that it appears to glow from within. It has 82 facets (24 more than even the highest quality cut diamonds on earth). In addition to the gigantic diamond centerpiece, the necklace features 224 individual baguette diamonds and 353 round diamonds.

In April of 2022, this necklace came to the public’s attention when Beyoncé wore it. Only three other women in its history have worn The Empire Diamond: Audrey Hepburn, Mrs. E. Sheldon Whitehouse, and Lady Gaga.

The fifth most expensive necklace in the world is Creation I, a sensational diamond and emerald necklace by De Grisogono. It is the largest D Flawless diamond on earth, and the most expensive diamond ever sold at auction. The centerpiece of the necklace is a 163.41-carat emerald cut diamond.

The De Grisogono Creation I diamond is the largest diamond in its class in the world. It hangs from an asymmetrical diamond and emerald necklace base. The base boasts 6000 emeralds and 200-carats of diamonds, not counting the central diamond.

Uncut, the Angolan diamond was a whopping 404.20-carats. It was the 27th largest diamond ever found. Gemologists predict that the stone is billions of years old.

The diamond itself has a rare designation as a Type IIa diamond. That means it does not contain any nitrogen. The absence of this element has made it exceedingly clear. A colorless, chemically pure diamond such as this one is astronomically rare.

The fourth most expensive necklace in the world is the Incomparable Diamond Necklace. It features a 407.48-carat fancy deep yellow diamond. The diamond is the largest internally flawless diamond that the GIA has ever rated.

The many diamonds are set in 18K rose gold. Amazingly, this stunning stone was not always treasured and gilded. A little girl in the Democratic Republic of Congo found it sitting on a pile of rubble!

The diamond necklace was a gift from the actual Nizam of Hyderabad, Asaf Jah VII, in 1947. Then the richest man in the world, Jah allowed Elizabeth to choose anything she wanted from Cartier’s collection.

She chose an abstract floral necklace set with over fifty diamonds, including 13 emerald-cut diamonds and a drop diamond. The designer created it to match an equally stunning floral tiara. Queen Elizabeth wears the necklace on the artwork featured in various pieces of global currency, including the Bahamian dollar bill.

While none of the jewels themselves has any particular historical value, the design of the necklace is a masterpiece. Now that the Queen has worn the piece, it has earned its place as a piece of historical significance. In recent years, Kate Middleton has also worn the necklace, adding to its celebrity status.

The second most expensive necklace in the world is A Heritage in Bloom, designed by Wallace Chan. The piece features 11,551 diamonds, totaling 383.40 carats. 24 of the diamonds have a D-colour internally flawless designation from the GIA, including the 104-carat center diamond.

The GIA rates diamonds based on the four C’s: cut, color, clarity, and carat weight. A diamond with a stunning cut, D-color designation, and internally flawless designation is fundamentally perfect. This necklace contains 24 such diamonds, including one with a massive and remarkable carat weight.

The central diamond began as a 507.55-carat rough Cullinan heritage stone. On its own, it has a value of $35 million.

On top of that, the necklace is a work of art. The design takes inspiration from Chinese culture and features numerous figures carefully wrought out of precious metals and gems. It took Wallace Chan 47,000 hours to complete the necklace.

Chan designed the piece to be versatile, and wearers can style it in 27 unique ways. It is unlikely that anyone will be wearing it, however. Historians have called the piece priceless and it is not for sale.

The most expensive necklace in the world is The Hope Diamond, which has a value of $350 million. The piece features a 112 3/16ths carat violet diamond that was first mined in Golconda, India. In 1673, it was one of the first vivid blue diamonds found on earth.

The Hope Diamond has changed hands many times since its discovery in France in the seventeenth century. It once belonged to both King Louis XIV and King Louis XV.

It became the property of the French government after King Louis XVI and Marie Antoinette attempted to flee the country. In 1792, it went missing.

It turned up again in 1812, but the mysterious history of the gem is part of its allure. It earned the name “The Hope Diamond” when Henry Philip Hope possessed the piece. He was one of the heirs of the Hope & Co banking empire.

It would change hands several more times before coming into the possession of Mrs. Evalyn Walsh McLean, who would have it mounted as a necklace. The necklace features three tiers of large white diamonds with the Hope Diamond at the center.

Today, the historical diamond lives in the Smithsonian collection, where it is one of its most popular attractions.

The gem has gone through a lot over its history and, after many cuttings, there are only 45.52 remaining carats. It is a type IIb diamond, which glows red when exposed to UV light. The GIA has rated the color as a fancy dark grayish-blue.

The World’s Most Expensive Necklace

Throughout history, rulers and philanthropists of all stripes have sought to show off their wealth in opulent and over-the-top ways. Investing money in the most expensive necklace possible was one way to make wealth and riches stylish and tangible. When you own a piece of jewelry this expensive, it’s like wearing a bank vault around your neck!

Are you curious about the other ways that wealthy people have shown off their riches throughout history? You can find more information about the world’s most expensive things on the blog. Start with this post about the most expensive crystals in the world.