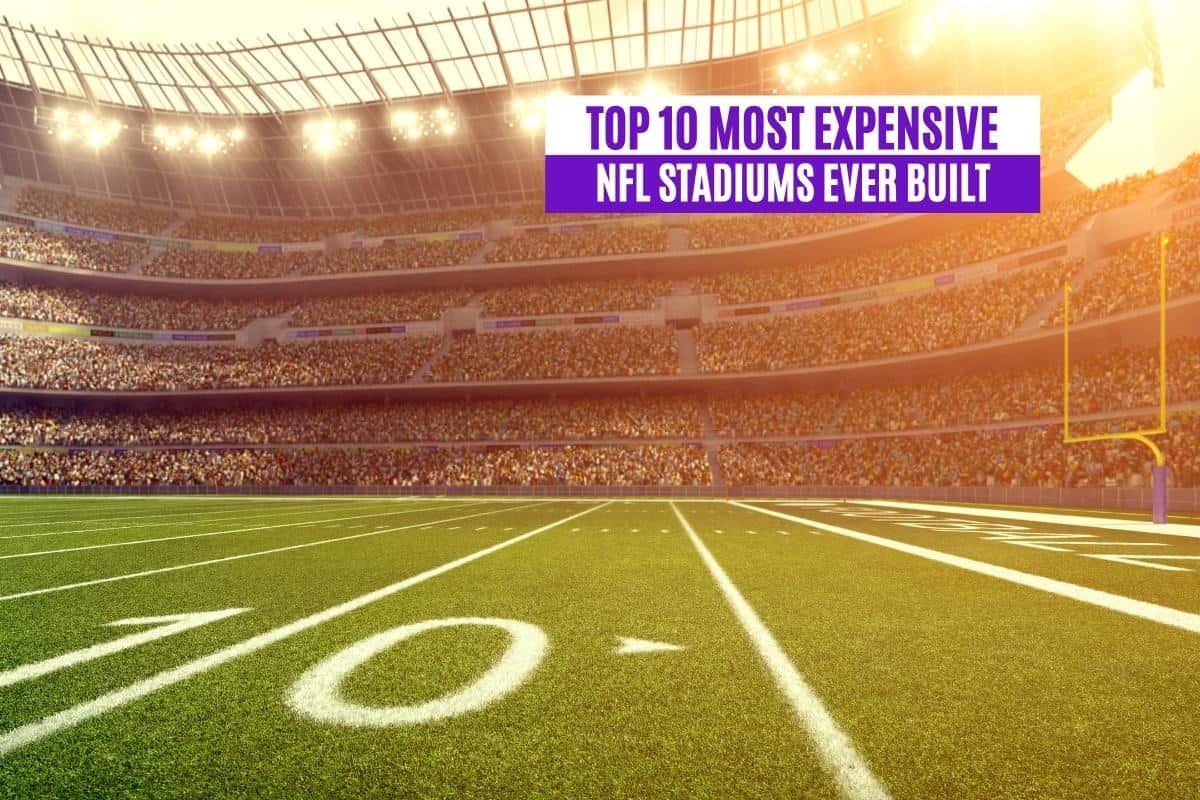 At the most practical level, the only thing a team needs to play a complete game of football is 100 continuous yards of space. If you ask the architects who work with the NFL, however, the best and most expensive NFL stadiums need a lot more than that! In fact, the majority of NFL team stadiums cost millions of dollars to construct.

Why do NFL teams need stadiums that rival the world’s most lavish hotels and landmarks? For most cities, their stadium is a major point of pride. It is a tangible symbol of everything unique and vibrant about the community where it stands.

After all, professional football games are about more than the sport. These over-the-top luxury stadiums often feature pyrotechnics, world-class professional lighting, massive, high-end video monitors, and the best sound systems on earth. Many stadiums have clubhouses, restaurants, bars, and other spaces integrated into their sprawling, innovative designs.

All of the world’s most expensive NFL stadiums have something that makes them unique from the other stadiums in the league. These features put the structures over the top and justify their hefty price tags.

Here are the Top 10 Most Expensive NFL Stadiums:

The tenth most expensive NFL stadium in the world is Ford Field, which costs $500 million. The owners finished construction on the Detroit stadium back in 2002, and it is now the home of the Detroit Lions. It seats 65,000 eager fans each game.

Detroit is a cold city and the architects behind the Ford Field Stadium kept the chilly weather in mind! A permanent dome sits above the field, supported by structural steel that can withstand the fiercest blizzard conditions.

The entire stadium isn’t constructed out of contemporary materials, however. The building’s entire south wall is made out of reclaimed materials from the Hudson Warehouse, a building from the 1920s. The stadium has a six-story glass atrium that lets in natural light and offers fans a view of the city of Detroit.

When you explore Ford Field, you’ll find 140 luxury suites, a club lounge, several banquet rooms, and convention spaces. Massive video boards sit at both end zones. It has a 90-foot-long bar, The Corner Bar, inspired by the bar in the Lions’ previous stadium home.

The ninth most expensive NFL stadium in the world is Lincoln Financial Field in Philadelphia, Pennsylvania, home of the Eagles. Constructed in 2003, the $512 million postmodern structure seats 67,594 spectators. It opened its doors to Philadelphia’s most ardent fans in 2003.

The Lincoln Financial Field, which fans call “The Linc,” features 117 luxury suites, a fan-oriented plaza space, and a dedicated team store. There are HD video scoreboards at both end zones.

The stadium’s three open plaza corners make it unique from other stadiums in the NFL. They provide fans with expansive views of the city of Philadelphia and the gameplay below. Its distinct, wing-like roof design both protects fans from the elements and helps keep the acoustics sharp and pleasant.

Architects designed The Linc with fan accessibility in mind. Two-thirds of the stadium’s seats put fans only 60 feet from the playing field. Nearly any Eagles fan can enjoy watching their favorite team right from the sidelines like a celebrity.

The eighth most expensive NFL stadium in the world is Lucas Oil Stadium in Indianapolis, Indiana. The $720 million stadium, which opened in 2008, has a 70,000 seat capacity. It is the home of the Indianapolis Colts.

Like many of the world’s most expensive NFL stadiums, Lucas Oil Stadium features a retractable roof, allowing fans and players to enjoy the open air.

Additionally, it has a retractable window, providing a gorgeous view of downtown Indianapolis. The architects intentionally designed the building to sit at an angle. This improves the striking view of the skyline in the city below.

Inside, there are 139 suites, two club lounges, twelve meeting rooms, and two exhibit halls. The tech in the space includes two 53-foot HD video boards and a 360-degree ribbon board.

The seventh most expensive NFL stadium in the world is the U.S. Bank Stadium, a $1.1 billion structure that opened in 2016. The distinctive stadium is the Minneapolis home of the Minnesota Vikings. 73,000 Vikings fans can enjoy the game inside the luxurious stadium.

The U.S. Bank Stadium has several features that help it stand out among other billion-dollar sports complexes. It possesses the largest transparent ETFE roof in the country and the largest pivoting glass doors in the world. The lightweight roof has allowed for unique feats of design and engineering, as it requires less steel.

The stadium’s amenities include 135 suites, two private bars, six club lounges, and $100 million worth of technology. The stadium has seven distinct levels, including two 360-degree concourses open to the public. There are over 2,100 flat-screen televisions on display.

The sixth most expensive NFL stadium in the world is Levi’s Stadium in Santa Clara, California. The $1.2 billion stadium hosts the San Francisco 49ers and seats 68,500 enthusiastic football fans. It opened to the public in 2014.

Levi’s Stadium might have cost over a billion dollars, but it’s one of the NFL’s smallest stadiums by capacity. Most of the expense went toward sustainability, which is present in nearly every element of the building’s design and operation. The building was the first NFL stadium to become LEED certified.

The construction team built Levi’s Stadium out of recycled and reclaimed materials. It utilizes recycled water for all industrial tasks and generates much of its own energy. Additional features include the 27,000 square foot green roof and three solar bridges, which each support hundreds of solar energy panels.

The real estate was costly, too. The stadium’s dedication to sustainability extends to its location, accessible to all local public transportation.

The fifth most expensive NFL stadium in the world is the AT&T Stadium, which seats 80,000 fans in Arlington, Texas—or 100,000 during major events. The $1.48 billion structure is the Dallas Cowboys’ home stadium. It opened in 2009.

AT&T Stadium is in Texas, and everything is bigger in Texas! It is home to the first center-hung HDTV video boards and includes 25,000 square feet of video displays.

The stadium itself is truly massive, with a total square footage of 3 million square feet. It is large enough to house the entire Statue of Liberty from tip to toe!

The stadium has a retractable roof. When the roof is down, AT&T stadium is the world’s largest enclosed NFL stadium. On hot Texas days, fans can enjoy an open-air experience.

The fourth most expensive NFL stadium in the world is the Mercedes-Benz Stadium, which opened in 2017. The $1.5 billion stadium is in Atlanta, Georgia, where it hosts the Atlanta Falcons and up to 75,000 of their fans.

When construction began on Mercedes-Benz Stadium, the goal was to construct the greatest sports entertainment complex in the world. The Westside of Atlanta was struggling, and developers believe that the stadium could make a massive difference for the languishing community.

The expansive stadium certainly created jobs! It is home to a 100-yard bar, 24 restaurants, and a technology lounge. Before the construction of the SoFi stadium in 2020, Mercedes-Benz was home to the world’s largest 360° HD video halo board.

Some expense also went into ensuring that the stadium would be green. It is water-efficient and generates power using 4,000 photovoltaic solar panels.

Most notably, however, the stadium has a retractable roof unlike any other stadium in the United States. It features eight moving panels that can open when the weather is nice.

The third most expensive NFL stadium in the world is MetLife Stadium in East Rutherford, New Jersey. Despite its location, this $1.7 billion stadium is home to two New York teams: the New York Giants and the New York Jets. 82,500 fans each game have been enjoying their favorite teams since 2010.

While MetLife Stadium held the record for the most expensive NFL stadium until 2020, it’s not the most impressive. Most of the stadium’s $1.7 billion price tag is due to its location. All construction within the NYC metropolitan area is a massive expense, and a high-capacity stadium was a mind-blowing real estate investment.

Although it’s a little more than a decade old, MetLife lacks many of the amenities that make other expensive stadiums great. There are no high-tech scoreboards, retractable roofs, or exciting architectural features. It took a $1.7 billion investment just to make the space serviceable!

Fans do appreciate the location, however. Unlike many of New York’s stadiums, MetLife is easily accessible by train. When they get there, however, a common refrain from fans is that the stadium is kind of drab.

The second most expensive NFL stadium in the world is Allegiant Stadium. The $1.9 billion stadium is in Paradise, Nevada, and hosts the Las Vegas Raiders. The stadium opened its doors in 2020 and can seat 65,000, but expands to a 72,000 seat capacity for special events.

One unique feature of the new Las Vegas stadium is its real grass field. It isn’t the grass itself that was so costly, however. The floor of the stadium is completely removable so that the grass can receive direct sunlight when the game is not in play.

The stadium gets plenty of natural light, however, as it sports an entirely translucent roof. Through this roof, fans can spot the stadium’s defining feature: an 85-foot 3D printed torch in honor of former Raiders owner Al Davis. Nevada is hot, so the stadium is fully domed to protect the fans from the scorching desert temperatures.

The location of the stadium also factors into the cost. From the north end of the stadium, fans enjoy a stunning view of the lustrous Vegas Strip. It is scenic, centrally located, and accessible.

The most expensive NFL stadium in the world is SoFi Stadium. This $5.5 billion structure located in Inglewood, California is home to the Los Angeles Rams and the Los Angeles Chargers. It opened in 2020 and can seat 70,240 zealous fans.

The architects behind the brand new SoFi Stadium had a goal: they wanted to bring the feeling of the outdoors to an indoor stadium. This wasn’t an inexpensive task! It required the construction of numerous sculpted concourses, an artificial lake, and a sprawling seating bowl.

One of the most distinctive features is the stadium’s translucent roof, which is open to the sky. Its crystal clear ETFE panels allow natural light to flood the space. Each customized panel can support the weight of a car.

The architects claim that the inspiration for SoFi’s distinctive curves came from the curves of the expansive California coast. Nearly every panel on the building is a unique work of art in itself. Its aluminum panels change colors as the sun moves in the sky.

A lot of the $5.5 billion went toward the tech in the space. The centerpiece is the 120-yard video board which hovers just above the field. The high-tech halo-shaped screen is visible from every seat.

Private funders were willing to spend the money in the hope that the stadium will become the crown jewel of a new entertainment district. All in all, the stadium took six years to construct.

The Most Expensive NFL Stadiums

In years to come, it may be impossible to find an NFL stadium that cost less than a billion dollars to construct. With the success of SoFi Stadium, other cities are looking to refresh their athletic architecture. Nashville, Tennessee, might become the next major city to host one of the most expensive NFL stadiums in the country!