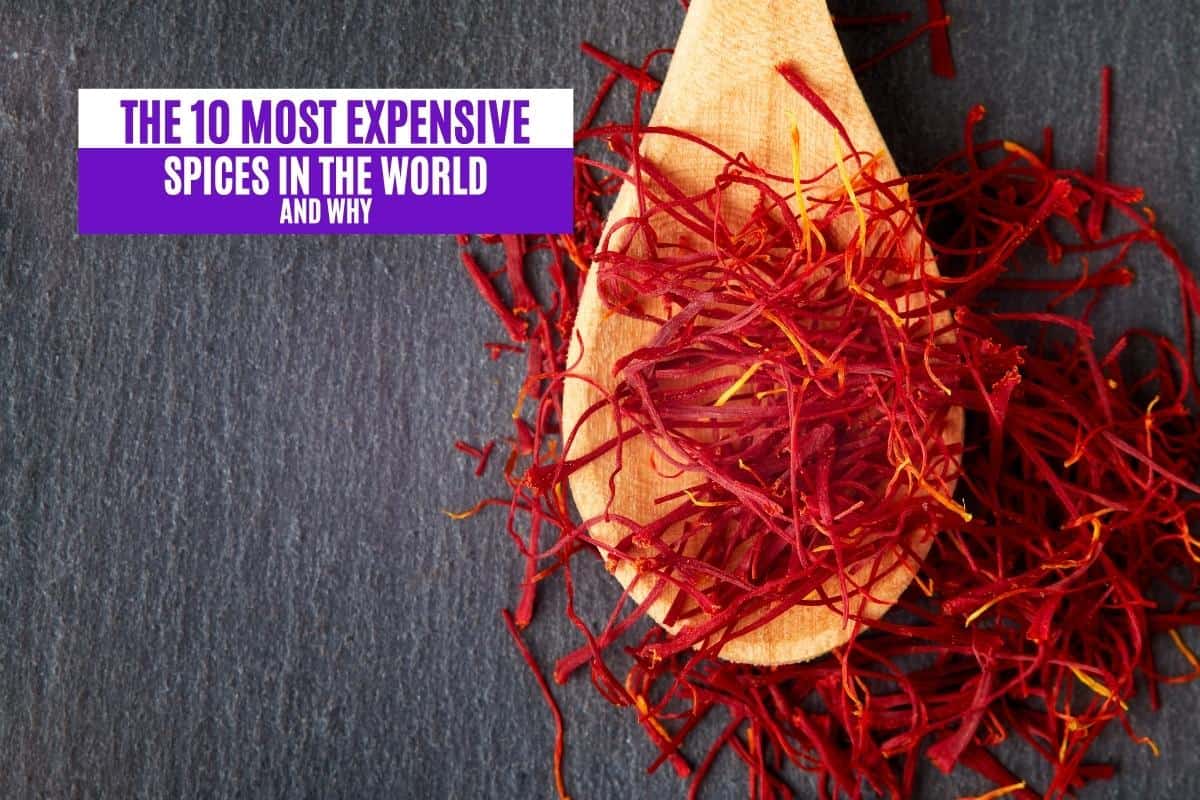 From Saffron that is picked by hand to Vanilla Beans that need to be cured for months, the cost of these spices is high because of the hard work and time that goes into growing and harvesting them.

But, it’s not just the difficulty of getting these spices that makes them expensive. It’s also their flavor and purported medicinal properties. These spices come with a hefty price tag and for a good reason.

In this blog post, we will explore the 10 most expensive spices in the world and find out what makes them so special! We’ve also included one honorable mention.

But, what is it about these spices that makes them so valuable? Take a look to learn more about why they’re unique.

Cumin is a spice that is used in both Indian and Mexican cuisine. It has a smoky, earthy flavor and is often used to season meats and curries. But the most luxurious cumin in the world is grown in the Kashmir region of India.

Cumin is also known as “the king of spices” because it was historically one of the most expensive spices in the world, making it one of the most popular spices to produce internationally.

Rajasthan farmers have famously suffered great losses in cumin production due to locust attacks and unseasonal rains on their farms.

Why Is Cumin So Expensive?

To grow it, the cumin plants are hand-picked and dried in the sun. This careful harvesting process contributes to its high price tag. The plants are also dried for a longer period to bring out their flavor, which further drives up the cost. Legend has it that cumin was so valuable in ancient times that it was used as currency!

Cumin seeds are the main component of garam masala, an Indian spice blend that is used in many curries. Cumin leaves are also used in Indian cuisine and are known for their medicinal properties.

As a herbal remedy, they are believed to help relieve respiratory problems, fever, and pain.

Ginger is a popular spice that has many health benefits. It’s anti-inflammatory, can help with nausea, and has been shown to improve brain function.

Why Is Ginger So Expensive?

The most expensive ginger comes from Zanzibar and is worth $175/pound. It’s grown in small quantities and is highly sought after. The land is also difficult to farm, which drives up the price.

The roots are difficult to harvest without damaging them which also contributes to the cost. The oldest ginger farm in Zanzibar is more than 150 years old. Some people believe it’s the only place in the world you can find the “true” ginger.

Turmeric is a spice that is often used in Indian cuisine. It has a warm, peppery flavor and a bright yellow color. Turmeric is also known for its medicinal properties. It has been used for centuries to treat everything from joint pain to depression.

Turmeric is also used as a natural dye. Clothing, food, and even cosmetic products can be made using turmeric.

Why Is Turmeric So Expensive?

The most expensive turmeric comes from the Nilgiri Hills in India. It’s worth $200/pound and is considered to be the best in the world. The reason for its high price tag is due to its rarity. The hills are difficult to access and the crop yield is low.

Turmeric is expensive because it is labor-intensive to harvest. The root of the turmeric plant must be dug up and then dried before workers grind it into a powder. Additionally, the finest turmeric in the world is grown on farms that have existed for generations, making it a rare and expensive commodity.

Paprika is a spice made from the dried fruits of various plants in the nightshade family. It is typically red, orange, or yellow.

Paprika adds flavor and color to dishes such as goulash, chili con carne, and Spanish rice. It is also a common garnish on deviled eggs, potato salad, and egg salad.

In some countries, paprika has a reputation for being a medicinal spice. Some cultures consider paprika to be good for the stomach, liver, and gallbladder.

Why Is Paprika So Expensive?

Paprika is a spice made from bell peppers and other red peppers. When the peppers are fresh a large amount of their weight is water, but when they are dried they become more expensive pound-for-pound because they shed that weight.

Peppermint is one of the most popular mints and it is also one of the most expensive. It has a sweet, cool taste that can be refreshing. Peppermint oil is an ingredient in toothpaste, mouthwash, chewing gum, and candy. It is also used in aromatherapy and as a flavor in food.

In the 1800s, peppermint was a popular remedy to treat stomach aches and headaches. Today, it is still used to treat a variety of medical conditions including irritable bowel syndrome, nausea, and vomiting.

Why Is Peppermint So Expensive?

Peppermint is expensive because it is in high market demand, there are some rare and high-quality varieties. Fresh peppermint, dried peppermint, and peppermint essential oils are all widely available. So, it’s relatively expensive to produce at volume. It requires plenty of sunshine, time, or in artificial conditions, grow lights.

Originating from Sri Lanka, cinnamon is the most expensive spice in the world. It has a sweet, woody flavor due to the fact it’s an oil-laden type of tree bark and is often used in desserts and baking. Cinnamon can also be a good addition to savory dishes for extra flavor.

Some people believe that Cinnamon has many health benefits, including reducing inflammation, boosting cognitive function, and helping to regulate blood sugar levels.

In 2800 BC, funeral officials buried the pharaohs of Egypt with jars of cinnamon to ensure they would have it in the afterlife. Some studies have recently found it may have health benefits.

Why Is Cinnamon So Expensive?

The finest cinnamon comes from the bark of a specific type of tree, which only grows in a small area on the island of Sri Lanka. Thus, “true”e cinnamon is one of the rarest spices. The trees must be at least twenty years old before harvest. As such, there is a limited supply available.

Cloves are the dried, unopened flower buds of a tree in the Myrtle family. They have a sweet, astringent taste and are a common flavor addition for both sweet and savory dishes. Cloves are also used as a natural fragrance for a variety of purposes.

Cloves are popular for treating a variety of medical conditions, including toothache, indigestion, and nausea. They are also used as a natural remedy for skin problems such as acne and athlete’s foot.

Why Are Cloves So Expensive?

Cloves are labor-intensive to harvest. The buds must be individually hand-picked, which is why they are one of the most expensive spices in the world. They grow in warm, humid climates and are susceptible to disease, so that’s another reason why expensive to produce. The finest cloves in the world come from the island of Zanzibar.

The third most expensive spice in the world is cardamom. This spice has a sweet, citrusy flavor and is often used in Indian cuisine. Cardamom is also sometimes used as a medicinal herb. It’s believed to help with respiratory problems, improve digestion, and reduce stress levels.

Cardamom tea is a popular drink in India, and it’s also used to make desserts such as kulfi. Like a lot of the other precious spices on this list, it has purported health benefits including aiding digestion, reducing stress, and helping with respiratory problems.

Why Is Cardamom So Expensive?

Cardamom is grown in Guatemala, Sri Lanka, and India. The highest quality cardamom comes from Guatemala. It’s sold for $350/pound. To grow cardamom, irrigation is necessary, and the plants need to be hand-pollinated. Cardamom is another labor-intensive crop to harvest.

The sweet and creamy flavor of vanilla is a prized possession in the culinary world. The high demand for this delicious spice has made it one of the most expensive on the market.

Do vanilla beans have any supposed health benefits?

Some people believe that vanilla beans have anti-inflammatory properties and can help with digestion. But, that could be because their favored method of ingestion is vanilla ice cream!

Why Is Vanilla So Expensive?

Vanilla beans come from the fruit of an orchid plant. Like some other spices on this list, the vanilla plant must be hand-pollinated to produce any pods.

The process is labor-intensive and time-consuming, making the cost of this spice understandably high. Workers pick the vanilla pods then dry them for several weeks. The pods are then cured in bourbon or rum to give them their characteristic flavor.

Saffron is the most expensive spice in the world, and for good reason. It takes over 150,000 crocus flowers to make just one pound of saffron!

Why Is Saffron So Expensive?

The stigma (the part of the flower known as saffron) must be hand-picked which makes it very labor-intensive.

Workers hand-pick each flower and they delicately remove the stigmas inside. It takes a lot of time and effort to harvest saffron, which is why it’s one of the most expensive spices in the world.

Workers pick the stigmas dry them and grind them into a powder. Saffron’s distinct flavor and color make it a prized possession in the culinary world. Becoming a saffron farmer is a long and difficult process, but the result is well worth it.

Comparing saffron, weight-for-weight, to gold. The gold price per ounce is around $1,800 today. According to Daily Mail, a gram of saffron can be sold at £75 per gram, which is equivalent to around $2,835 per ounce, so saffron can be worth more than gold per ounce due to various factors such as harvesting is so laborious. That’s why saffron is the most expensive spice in the world.

Although these little fungi are not spice, they are often added to dishes to impart their unique flavor. Truffles are the most expensive food in the world, and can cost up to $3000 per pound!

Legend has it that they are a powerful aphrodisiac, and that’s one of the reasons why they are so prized.

Why Are Truffles So Expensive?

Like saffron, truffles are a labor-intensive crop to harvest. They grow underground and must be dug for by hand. The process is very tedious and can only be done by specially-trained dogs or pigs.

The process of training a dog or pig to hunt for truffles without eating them is also a time-intensive and expensive process.

Truffles are a delicacy in the culinary world and their unique flavor is unmatched by any other food. That’s why they are the most expensive food in the world.

The Most Expensive Spices in the World

So there you have it, the ten most expensive spices in the world! And, one honorable mention. These spices are prized for their delicious flavors and because of how difficult they are to produce. Weight for weight saffron can be more valuable than gold!

Do you have a favorite spice?