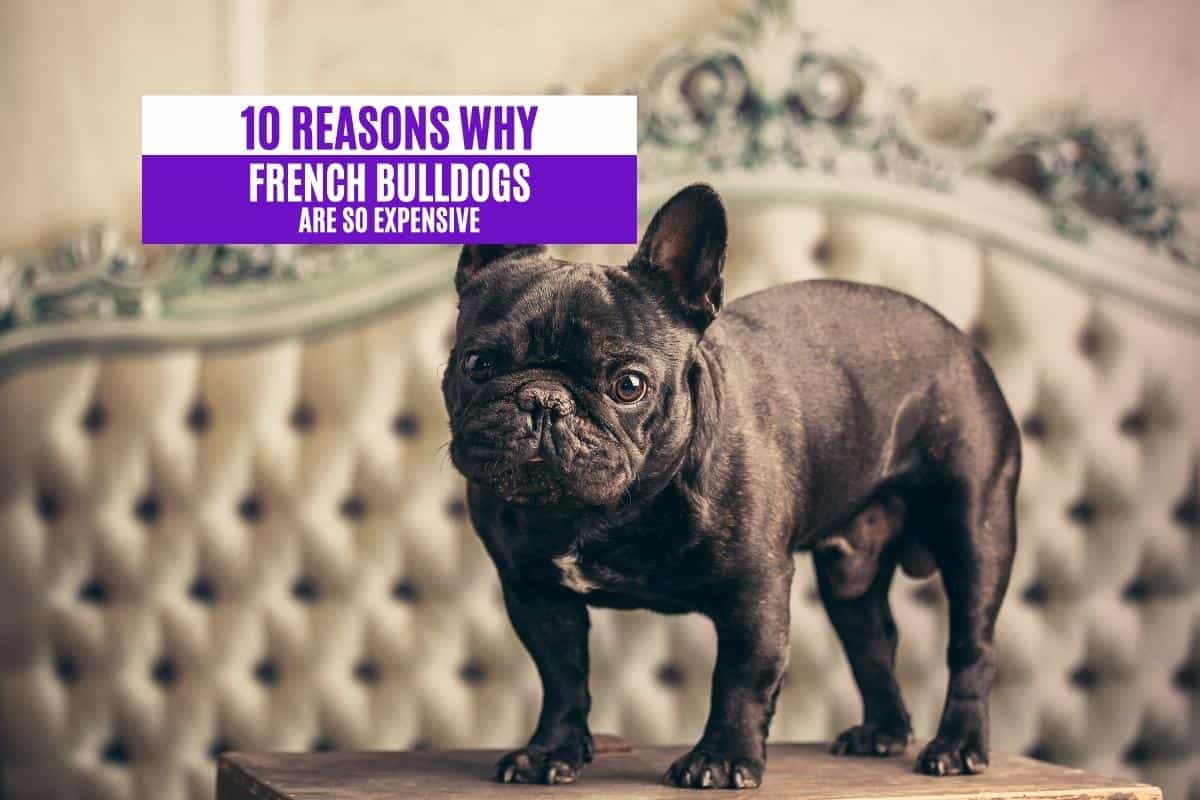 According to the American Kennel Club (AKC), French Bulldogs were the second-most popular dog breed in the U.S. in 2021. However, these pups are also some of the costliest purebred dogs. But why are French Bulldogs so expensive?

French Bulldogs are expensive for several reasons, including breeding challenges, small litter numbers, and a high prevalence of costly health problems. Caring for a French Bulldog can also be incredibly expensive, as these dogs require a ton of attention and don’t train quickly.

If you’ve been thinking of adopting a French Bulldog, you’ll want to familiarize yourself with the reasons why they’re some of the most expensive dogs. Fortunately, we’ve got the scoop on why these pups are so pricey, with the top reasons ranked just below.

Here’re the Top 10 Reasons Why French Bulldogs Are So Expensive:

10. You May Need To Adopt From Out-of-State Breeders

There are plenty of reasons why French Bulldogs tend to cost a few thousand dollars. Location is one of the most influential factors affecting price.

The breeder may also charge you hundreds of dollars to transport your French Bulldog to your home. So, if there aren’t any reputable French Bulldog breeders in your state or town, you can expect to spend a little more.

Still, getting your name on a waitlist for a French Bulldog might be the more significant challenge, as these dogs are in high demand.

9. The Demand for French Bulldogs Is High

But you may be wondering, “Why have French Bulldogs become so popular recently?” There are a few answers to this question.

Firstly, French Bulldogs are a low-energy breed. They don’t require a ton of outdoor playtime to stay healthy and happy. This quality has made them a popular choice for those who’ve transitioned to an at-home working environment.

Secondly, French Bulldogs are affectionate and friendly. They’re fantastic companion dogs, making them a natural choice for pet parents struggling with significant life changes. It’s not hard to understand why this breed’s popularity skyrocketed during 2020 and 2021.

8. French Bulldogs Are Challenging To Train

Consequently, most pet parents will need to invest in professional dog training courses to ensure their pup is well behaved. These training courses can be pretty pricey, especially when you consider that French Bulldogs often need more training than other breeds.

The average price per training class is about $50. So one class per week for a year amounts to about $2,400! That’s almost equal to the starting price for these dogs.

And suppose you don’t offer your French Bulldog plenty of attention. In that case, it can start exhibiting a range of unwanted behaviors, including destroying furniture or peeing on the floor.

7. These Dogs Require a Ton of Attention

Like many of the world’s most expensive chocolates, French Bulldogs are sweet! But their loving demeanor doesn’t mean they’re always well-behaved. If you’re not able to lavish plenty of attention on your pup, they can do some naughty things.

It’s not unusual for these dogs to chew on furniture, pee on the floor, or bark incessantly if left alone for several hours. As a result, pet parents must invest plenty of money to keep their French Bulldog entertained, especially if working away from home.

Pet cameras with microphones and treat dispensers are a must for any household with a French Bulldog. These devices typically cost more than $100. If you plan on owning a French Bulldog, you’ll also need to purchase plenty of interactive toys to keep them occupied throughout the day.

Overall, owners should expect to spend between $300 and $800 each year on entertainment and communication items for their pup. They’ll also need to budget for potential health problems.

Some of these conditions are avoidable, especially when adopting from a reputable breeder. But others are just a natural part of owning a French Bulldog. As a result, annual veterinary costs for this breed tend to be higher than with mixed-breed pups.

Mixed-breed dogs are almost always less expensive than purebred dogs. The only exception to this rule is designer hybrid dogs from two different purebred breeds. For example, the Goldendoodle (half Poodle, half Golden Retriever) is an excellent example of a mixed-breed dog that costs about as much as a purebred French Bulldog.

But why are purebred breeds so pricey? The answer often comes down to lineage, breed standards, and showmanship ability. Essentially, the costliest purebred dogs exemplify precise physical characteristics associated with their breed.

Purebred dogs are also expected to have a personality that matches their breed standard. The combination of these two qualities (physicality and temperament) is called conformation. In short, dogs belonging to specific breeds are expected to ‘conform’ to the standards associated with that breed.

But, somewhat counterintuitively, rare coat colors (like isabelline) can increase a French Bulldog’s price, as their sometimes more desirable than standard colors, particularly among owners that don’t intend to show their dog at competitions.

Still, a purebred French Bulldog of any color is pricier than a mixed-breed pup, often due to their standardized traits. Besides, you can often trace the lineage of a purebred dog back several generations, which isn’t something you can usually do with a mixed-breed dog.

It’s crucial to adopt a French Bulldog from a reputable breeder that can prove each pup’s lineage. Otherwise, you could end up adopting a dog with significant and potentially fatal health conditions.

Still, dogs with pedigrees cost far more than those without lineage paperwork. A pedigree can add hundreds (sometimes thousands) of dollars to a dog’s initial price.

While some breeds are well-known for their large litter sizes (we’re looking at you, Labrador Retrievers), others may only give birth to two or three puppies per pregnancy. French Bulldogs are part of this latter group.

This small litter size increases the price of a French Bulldog. After all, the demand for these dogs is relatively high, but only a few are born with each pregnancy. Additionally, female French Bulldogs can only safely give birth about three times during their lives, and these births need to be spaced out to ensure that the dog remains in excellent health.

This limited supply of puppies, coupled with high demand, increases the price for these purebred dogs. Besides, each pregnancy can be incredibly costly, as French Bulldogs struggle to get pregnant and give birth.

2. They Can’t Give Birth Naturally

Producing French Bulldog puppies is challenging, as these adorable dogs often can’t safely give birth without human intervention. That’s because one of the physical attributes of this breed is narrow hips.

This narrowness increases the likelihood of developing specific health conditions, like hip dysplasia, but it also restricts the movement of puppies as they exit the womb. Additionally, French Bulldogs have large heads.

A puppy’s head can become stuck along the birth canal during labor. It can also cause significant tearing when exiting the mother dog’s body. Sadly, this tearing can lead to fatal blood loss.

Most pregnant French Bulldogs give birth via a cesarian section. This procedure significantly reduces the risk to the mother and her babies. However, it’s not a cheap procedure.

Most canine cesarian sections cost anywhere from $500 to more than $2,000. But a veterinarian-assisted birth isn’t the only complication that raises the price of a French Bulldog. These dogs also struggle to mate, and artificial insemination is typically the only way to produce puppies.

1. They Only Reproduce via Artificial Insemination

Breeding costs are the primary reason why French Bulldogs are so expensive. As we mentioned above, these dogs require an intense level of veterinary care to give birth. Unfortunately, they also give birth to comparatively small litters.

But did you know that French Bulldogs cannot produce puppies naturally? Their narrow hips make it challenging for them to reproduce sexually, and the act of mating can also be quite stressful for this breed.

Unlike the most expensive turkey breeds, an inability to naturally produce offspring almost always makes a dog breed more expensive.

Nearly all French Bulldogs result from artificial insemination. This is a process where the male dog’s sperm is collected, evaluated for sperm count, and then transferred into a female dog in heat via a pipette.

While breeders can choose to artificially inseminate French Bulldogs without veterinary assistance, the best way to ensure pregnancy is to have a licensed veterinarian perform the procedure. The standard price for canine artificial insemination varies between $500 and $1,000.

This high price is then transferred to the price of any puppies produced via artificial insemination. Generally, smaller litters will incur higher costs.

So, if the insemination process costs $1,000 and the female French Bulldog only gives birth to two puppies, the starting cost for those pups is more than $500, allowing the breeder to recoup their expenses and make a profit. Naturally, this starting price doesn’t include puppy care costs, genetic screening costs, cesarian section costs, or post-surgery recovery costs.

What Makes French Bulldogs So Special?

One of the primary traits that set French Bulldogs apart from other breeds is adaptability. As a result, they’re comfortable in most homes, including small apartments.

In addition, their low energy level makes them an ideal choice for pet parents who don’t enjoy long walks, hiking, or high-intensity play. In short, they’re lapdogs that don’t require a ton of outdoor time or a large yard to stay happy and healthy.

What Is the Average Price of a French Bulldog?

The average price of a French Bulldog is about $2,600. But prices vary depending on the dog’s age, gender, and the breeder’s location.

Puppies are more expensive than adult dogs. Additionally, pups born in California and Florida tend to be more costly than those bred in Alabama or Oregon.

Are French Bulldogs Worth the Money?

Though French Bulldogs are pretty expensive, they may be worth the cost. Potential pet parents who desire to own one of these unique dogs may not find the average price of ownership too high.

After all, French Bulldogs are affectionate and friendly. And unlike many larger breeds, they don’t have high energy levels. In fact, French Bulldogs only need about 20 minutes of exercise each day, sometimes less.

These qualities make them an excellent companion dog for retirement-aged individuals, adults who work from home, and people living in small apartments or houses.

Why Are French Bulldogs So Expensive?

So, why are French Bulldogs so expensive? The primary reason is that breeding French Bulldogs is challenging, as these pups can only reproduce through artificial insemination.

Additionally, pregnant French Bulldogs can’t give birth naturally due to their narrow hips. They can only give birth via a cesarian section, typically costing $2,000 or more!

Are you curious to learn more about the world’s most expensive animals and plants? If so, check out these related articles!

link to The 10 Most Expensive Goldfish in the World

When the pandemic hit, 55% of American adults turned to gardening and lawn care to occupy their time. This green interest also carried over indoors, with many homeowners picking up houseplants left,...