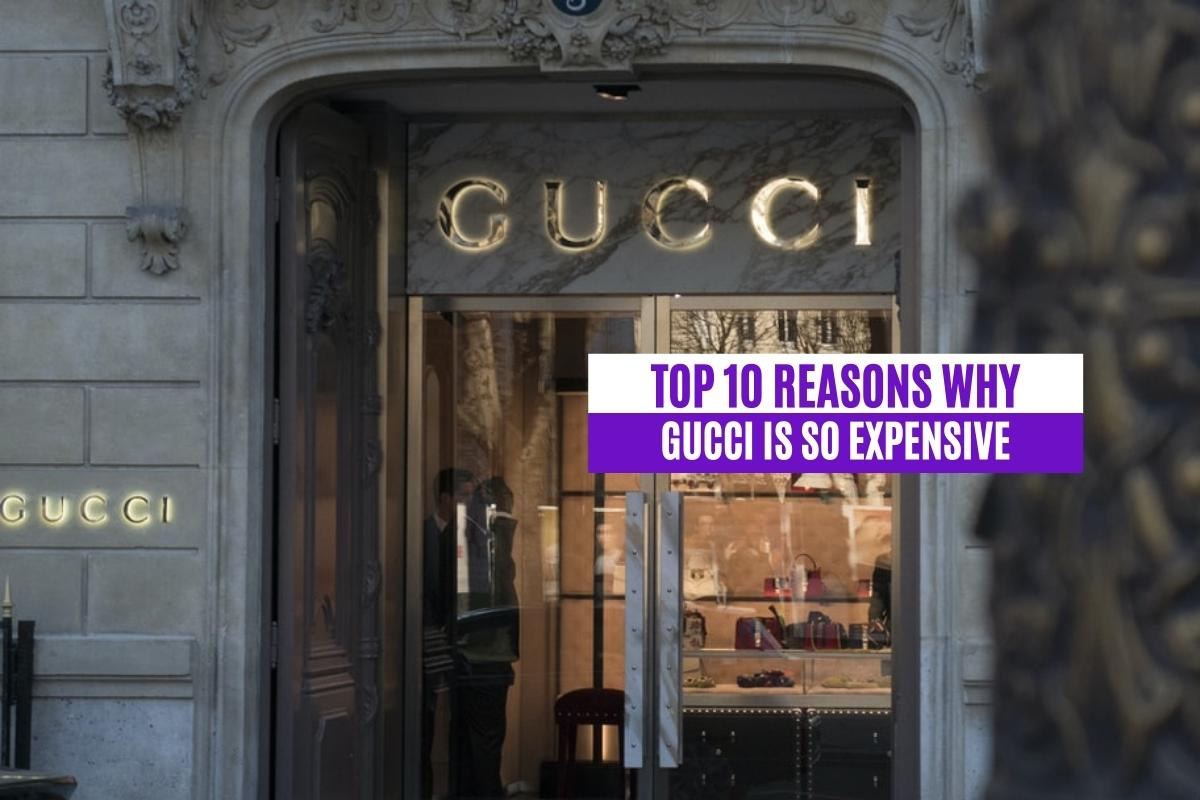 Gucci is a staple brand in high-end fashion, with many products in the $1,000 to $40,000 range. Selling all-things luxury apparel for over 100 years, Gucci is one of only two luxury brands that consistently rank among the world’s most valuable brands in the 21st century.

Why is Gucci so expensive, and how does it stay that way?

The story of Gucci is filled with financial and social ups and downs, including near bankruptcy in the 1980s and a murder within the family in the 90s. Despite this rollercoaster of a journey, Gucci continues to establish itself as a leading name in high-end fashion. Its pieces are worn regularly by influential celebrities, and its prices don’t look like they’ll be dropping soon.

Gucci opened in 1921, but its story begins before that in London. Guccio Gucci worked in one of the most expensive hotels in the city, The Savoy. After meeting many distinguished guests, from actors to politicians, Guccio felt he knew what the 1% were looking for.

He opened his own store in Florence, first selling bags, briefcases, and other leather goods. It wasn’t until around 50 years later that Gucci started producing the designer clothing lines we know and love today.

Despite its initial success, the company went broke in the 1980s as scandals around the family erupted in the media. But hiring Tom Ford as creative director in 1994 saw their market value jump to $4 billion in 5 years, and they’ve stayed on their game ever since.

Here Are the Top 10 Reasons Why Gucci Is So Expensive:

Everyone thinks of Gucci as expensive. You clicked on this article to find out why, but you ultimately knew it to be true regardless of the reasons. And that’s one of the tricks in Gucci’s pricing toolbelt.

Because everyone recognizes the brand as expensive (for the nine reasons after this one), they stay that way. Much like a self-fulfilling prophecy that works in its favor, our expectation of Gucci’s prices allows them to keep prices high.

Imagine if Gucci lowered its prices. Customers would likely be more confused than excited. Even as their customer base broadened, their profits would subside as the illusion of luxurious exclusivity was broken.

True, the following nine reasons help perpetuate the expensive image and are therefore more responsible for their consistently high price tags. But if we didn’t expect Gucci to be pricey, it wouldn’t be.

A high-end target audience allows Gucci to be expensive because their customers can afford the prices. What seems an exorbitant price to most people doesn’t sound that way to the richest in the world.

Gucci is far from groundbreaking in this respect. Luxury clothing brands like Louis Vuitton, Prada, Dolce & Gabanna, and Chanel aim at the same audience. And that audience has enough disposable income for all of them.

If Gucci were to position its products to be significantly more expensive than any of its peers, to the point that its target audience were people even wealthier than other luxury brands, it is hard to say whether it would increase or decrease its sales.

But they can maintain their high prices because they sit in a comfortable belt of luxury brands that all charge similarly high prices–because their target audience can and will afford it.

Said target audience not only can afford Gucci, they want to. Why? Because they’re the only ones who can.

Wearing Gucci—whether a bag, suit, or even belt—is a status symbol. The products’ glaring logo tells all far and wide just how much money you have to spend. In a mostly-capitalist Western society, buying designer brands is almost an accomplishment.

Gucci uses this slightly egotistical tendency of ours to their advantage. If they keep their prices high, they remain an iconic status symbol for people to aspire to.

Part of the appeal of buying and wearing Gucci is what it tells other people. If Gucci were to lower its prices, this element of the experience would slowly become less potent. Eventually, the brand itself would become less desirable and may not be able to increase its prices again successfully.

In much the same way as a wealthy target audience and feeling of exclusivity among clientele contributes to Gucci’s prices, celebrity ambassadors take it one step further.

Celebrities wearing Gucci always raise the brand’s profile—working as both marketing and clientele. For this reason, Gucci often uses big-name stars to model its pieces at shows around the world. By doing so, brand awareness reaches their fanbase and their wealthy peers.

This technique of reaching out to involve those in the public eye with the brand isn’t a new idea either. Gucci’s most famous scarf, “Flora,” was designed exclusively for Grace Kelly in 1966.

As if royalty wearing your products wasn’t enough, the design became so popular it was extended to different pieces across the line. Flora has even been credited with changing how we accessorize.

This impact on pop culture helped cement the Gucci brand as iconically luxurious, which likely would not have been possible without a celebrity’s face match with the product.

Marketing is key to any brand’s success. But how do you market a luxury product?

As once explained by a Lamborghini executive, Lamborghini doesn’t advertise on TV because people who buy Lamborghinis aren’t watching TV.

Gucci’s advertising campaigns are renowned for their beauty and elegance, all in line with the brand’s image. They also know how to make headlines – because that’s where their clients are.

Keeping in the public eye, just like their customers do, is all part of their strategy.

The most famous example of this is Tom Ford’s campaigns of the late 90s and early 2000s. They were full of semi and full nudity that was even more shocking for the time than it would be today. So much so, you’d probably recognize them even now.

The pieces featured in those ads, like the cut-out white dresses of 1995, took off and became icons in their own right. Because that’s what Gucci is, an icon.

So far, we’ve discussed why Gucci’s prices can stay so high. But how did the brand get that expensive to begin with?

While it’s true that the brand was designed to be a luxury one, appealing to an exclusive group of people, it also has some qualities that back up its price point. Otherwise, its image couldn’t have stood the test of time.

One of these crucial factors is quality. Quality is expressed in Gucci products in several ways, including the quality of materials used and the artisans’ skill.

We’ll explore those reasons later, but they all add up to reason number five—durability. Spending thousands, if not tens of thousands, on a designer jacket would seem foolish if the stitches started coming undone after only a couple of outings.

Instead, Gucci is designed to last. Obviously, there is a superabundance of cheaper brands on the market, ranging from average to pre-Gucci-level upscale, which are also durable. And Gucci isn’t particularly famous for being any more durable than its luxury brand competitor counterparts.

Nonetheless, the price tags wouldn’t hold up without such product durability. So Gucci designs its products to last.

For this reason, they often filter down through sale and resale to the point that even vintage Gucci items from the last century are still worn confidently today. Though this online reselling is far removed from the business itself, it proves the durability of products, contributing to its worth-the-money reputation.

The skill involved in crafting any piece of Gucci apparel is at the core of its cost. The best fashion designers and fashion crafters won’t work for cheap. Gucci has to pay the highest prices to employ the people who make their products.

After all, many Gucci pieces are handmade.

All of the products are still manufactured in Italy, outside Florence. Intricate stitching and embroidery on bags and clothing can only be done by hand and can take days.

The only exception to the Florence rule is watches made in Switzerland and perfumes made in France. But still, assembly is a painstaking task that raises the prices.

Did you know? Gucci was the first luxury fashion brand to branch out into watchmaking!

Regardless of which product you buy from a Gucci store, a customer knows the quality of the materials will be of the highest caliber. With goods made from crocodile skin, pigskin, and other expensive, hard-wearing materials, clientele are willing to invest in the product, trusting it will last.

Even for more affordable, non-leather items like designer sunglasses, products are always made from high-quality materials that customers trust will be worth the investment.

Most recognizable for its materials is Gucci’s 1947 bamboo handbag. It pioneered a new high-quality material to make up for more traditional materials being difficult to source in a post-war world. And that is the magic of Gucci – turning a necessity into a luxury.

And they are still on the ball. Gucci recently released vegan leather lines, broadening their audience by once again pioneering a material their customers will trust.

As if Gucci wasn’t exclusive enough, their lines are often limited.

What is released this season won’t be available next, and only a finite number of items are crafted. For this reason, many Gucci products go up in value over time, bucking the trend of almost all clothing purchases.

This strategy takes their exclusivity to another level by adding urgency. “If you don’t buy it now, you’ll never be able to.” Therefore many lines sell out soon after they’re available. For example, their KAI collection sold out on the day of release!

People are willing to pay to buy limited edition items, and Gucci is happy to oblige.

The brand is famous, luxurious, exclusive, high-quality, and, most of all, their products last. Therefore, consumers trust it.

A $600 shoe feels like a much more worthwhile investment if you know it’s Gucci. Because Gucci is a globally-recognized, trustworthy brand, you know it will hold up to the handmade, long-lasting, iconic standard they preach about.

Even a wealthy customer is less likely to invest that much money in a brand they know little about.

They don’t know. So customers hedge their bets and buy Gucci.

Why Is Gucci So Expensive?

A combination of world-class design, materials, marketing, and brand image is why Gucci products are so expensive.

This 101-year-old legacy continues to dominate high-end fashion. Gucci sets the standard for excellence in apparel and decides what future trends will be. While no one can predict what surprises their next line will hold, one thing’s for sure: it’ll be expensive!

link to Top 10 Reasons Why Supreme Is So Expensive

The Supreme brand has popularized the streetwear style and is worth billions of dollars. The iconic red-and-white brand logo might be simple, but Supreme products often sell for thousands of dollars....

Most Louis Vuitton handbags, luggage, and shoewear cost more than $1,000. This brand, founded in 1854, is one of the oldest and strongest fashion brands in the world. But why is Louis Vuitton so...