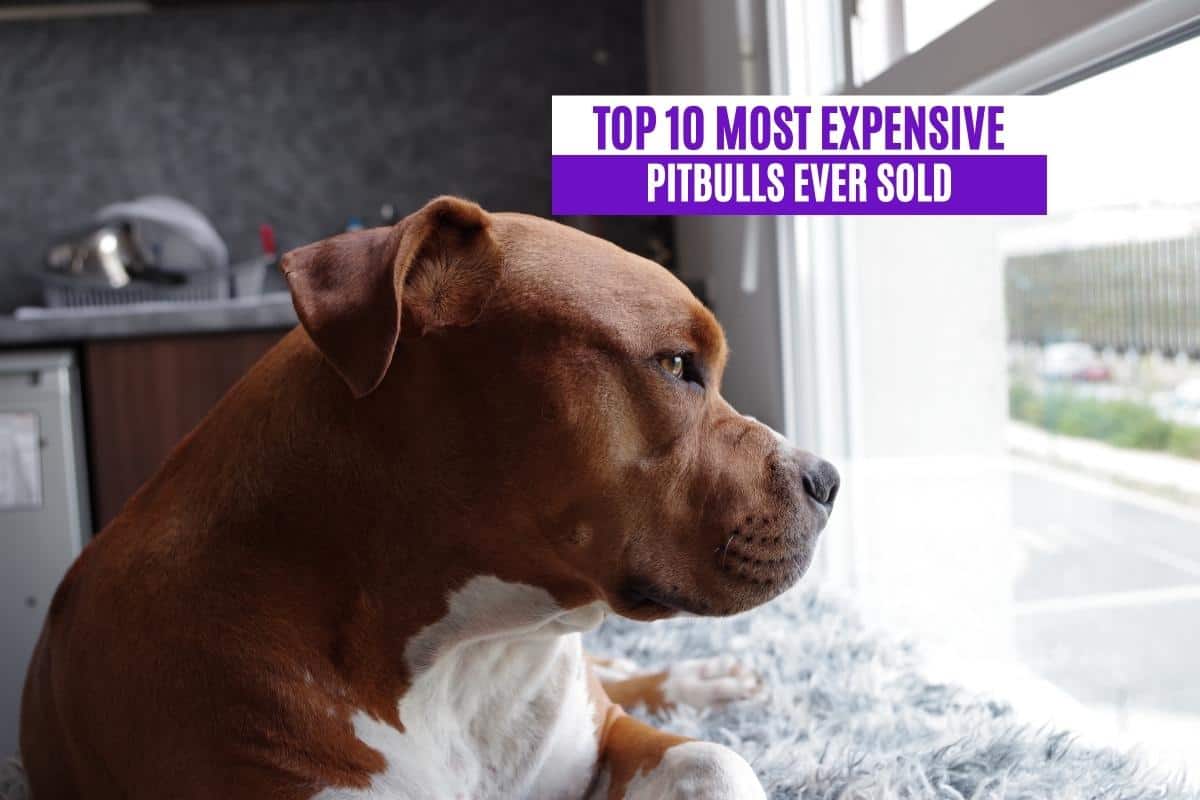 Pitbulls have the unfortunate reputation of being some of the most feared dogs on the planet. However, these kind-natured pups are valued by purebred dog lovers who appreciate the admirable qualities associated with pitbull breeds. These passionate pitbull fans are often willing to pay high prices for a pup, but what are the most expensive pitbulls?

The most expensive pitbull is White Rhino, a solid white American Bully. This Texas-born pup sold for a jaw-dropping $250,000, making him the priciest pitbull ever sold. Still, most American Bully dogs are costlier than other types of pitbulls.

This guide will explore the different types of pitbulls and offer a ranked listing of the priciest pitbulls ever sold. So, if you’ve got your eye on one of these powerful pups, you’ll know exactly how much to save before contacting a breeder.

The Different Types of Pitbulls

Some of these breeds are pricier than others. For example, the American Bully tends to be the most expensive type of pitbull, while the American Staffordshire Terriers are often the most affordable.

The Top 10 Most Expensive Pitbulls Ever Sold:

Though Staffordshire American Bulldogs are some of the least expensive types of pitbulls, they can still be quite expensive. Pups of this breed with black coats can be particularly pricey, as most of these dogs feature a mottled coat color.

A solid black Staffordshire is almost as rare as a solid white Staffordshire American Bulldog. These dogs can cost about $1,700 per puppy, though prices for adults are often far lower.

Puppies are particularly expensive, not only because of their age but because of the training required to turn them into well-behaved dogs. The first year alone can cost owners almost $5,0000!

Still, these Staffordshire puppies (commonly known as Staffies) are the priciest of all Staffordshire American Bulldogs, earning them a well-deserved spot on our ranking.

While lilac is often associated with the color purple (particularly lavender), lilac American Bulldogs aren’t a shade of purple. Instead, lilac combines white (or gray) and cream. This unique combination makes it one of the rarest fur colors.

A lilac-colored American Bulldog is particularly rare, as most dogs belonging to this breed are either solid white or white with black patches.

So, when a lilac American Bulldog enters the world, it’s a special day. And this rare occasion is often accompanied by an exorbitant price tag.

Depending on their lineage and origin location, these creamy-furred pups can cost $2,000 or more.

As a result, owners typically spend a decent amount on toys and training lessons for these pups. Still, lilac American Bulldogs aren’t nearly as pricey as white and brindle American Bulldogs.

But while the dog in this film is mostly white with black patches, the most expensive type of American Bulldog tends to be white and brindle pups.

It’s challenging to describe this color pattern. But the best way to picture a white and brindle American Bulldog is to imagine a mostly white pup with patches of multi-colored fur. This multi-colored coat often consists of dark brown and black fur.

Naturally, this price doesn’t include to cost to raise such a puppy, which often increases the starting price by several thousand dollars. That’s because American Bulldog pups are boisterous and energetic, requiring extensive training lessons and plenty of interaction to remain happy and healthy.

But the prices of these iconic dogs can’t compare to the cost of blue American Pitbull Terriers.

While you might imagine a bright, sky-blue pup when you think of blue American Pitbull Terriers, dogs with blue coats tend to have silver-gray coats with hints of navy blue.

This coat color is rarely achieved, even when two parents with blue coats are bred together. This is because this hue comes from the presence of recessive genes, making it far less likely to end up expressed.

When most people think of pitbulls, this is the breed they imagine. They have broad heads, wide-set eyes, and muscular bodies. However, they’re also incredibly sweet, and they typically feature either mottled light-colored fur or solid dark-colored fur.

As such, finding a blue American Pitbull Terrier can take years. When you find one, you can expect to spend at least $2,500 on a puppy.

Red American Pitbull Terriers have a rich brownish coat, but they often have white chests, bellies, and elbows. This particular type of coat color may not be as rare as some coat colors (we’re looking at you, fawn), but it is relatively rare.

A single red American Pitbull Terrier can cost $3,000, often more. This high price is often the result of the rare coat color, though lineage and location can also contribute to costs.

Additionally, American Pitbull Terriers are heavily discriminated against. You could pay thousands of dollars more each year to own one of these dogs, as many apartment complexes and regulated neighborhoods charge pet parents more to own this breed.

Still, that doesn’t mean you shouldn’t adopt one, as these pups are incredibly charming and friendly, especially when well-trained.

As we mentioned previously, blue-colored pitbulls are incredibly rare. This is true of American Pitbull Terriers and Staffordshire Bull Terriers.

If you live in North America and would like to own a Staffordshire Bull Terrier, you can expect to spend thousands on transportation fees alone. However, when you add adoption fees to this initial cost, you’ll end up with a total price tag of more than $4,000.

These clever dogs can also be quite costly to raise due to training costs and toy costs. In addition, while they’re exceptionally friendly and great with children, they also have relatively high energy and exercise requirements.

The best way to describe fawn fur color is to say it’s a golden, light brown with hints of cream. It’s very similar to the standard fur color of Golden Retriever dogs. However, American Pitbull Terriers have a very different lineage than retrievers.

Are you looking to own a fawn American Pitbull Terrier? If so, you can expect to spend at least $5,000 on the adoption, and several thousand dollars more on training lessons, veterinary exams, food, and toys.

We’ve reached the upper tier of pitbulls—American Bullies. This is the priciest pitbull type. But why is this kind of pitbull so costly?

Firstly, the American Bully dog experiences multiple breeding challenges. Due to their wide, stout bodies and large heads, they can struggle to reproduce naturally.

Additionally, these pitbulls often require specialized care when it comes to birthing puppies due to their comparatively narrow hips. While this breed has a large head and broad shoulders, their hips make birthing difficult.

It’s not unusual to see champagne American Bully puppies listed at $5,000 or more. This makes them some of the priciest pitbull puppies available. Still, the champagne tri American Bully is even more expensive.

Champagne tri (also called amarillo) American Bullies are similar to champagne American Bullies. The primary difference is that instead of having brown muzzles and paws, they have white fur in these spots.

However, there’s also a price difference. Champagne tri American Bullies can cost about $6,000 per puppy, sometimes more. That’s because white fur is a recessive trait for pitbulls.

So, producing a pup with the ideal combination of champagne fur and white fur is hugely challenging. Getting solid white offspring is even trickier, making solid white American Bully dogs the costliest type of pitbulls.

Lighter fur colorations, specifically solid colors, are very typically recessive. This means that they’re not commonly expressed. As a result, a small percentage of pups have solid, light-colored fur, with solid white being one of the rarest and most prized.

The priciest white American Bully ever sold was White Rhino, a male dog born and bred in Texas. He sold for a whopping $250,000! Still, some American Bully dogs are valued at twice this amount.

These dogs are highly prized due to their physical characteristics, like their large heads and flat nostrils. However, these traits are also why these dogs are challenging to breed and raise.

After all, pups with large heads are often delivered via cesarian section, often costing thousands of dollars. In addition, dogs with large flat noses may also experience breathing difficulties, particularly as they age.

The cost to own and care for one of these pitbulls is far higher than average.

What Is the Most Expensive Type of Pitbull?

However, it’s also crucial to take demand into account. American Bullies are smaller than other types of pitbulls, but they’re just as muscular. This quality makes them highly desirable among passionate pitbull fanatics, which naturally causes American Bully puppy prices to rise.

What’s the Most Expensive Color Pitbull?

White pitbulls tend to be the priciest of the bunch. This is because solid white pitbulls are rare, as white fur is a recessive gene. Like expensive Pokemon cards, the more rare something is, the pricier it’s bound to be.

What’s the Most Expensive Pitbull Ever Sold?

The most expensive pitbull ever sold is White Rhino, a white American Bully from Texas. This pitbull had an astounding $250,000 price tag. That said, some American Bully dogs have an estimated value of about $500,000.

Generally, the most expensive pitbulls are American Bullies, especially ones with rare coat colors and exceptional levels of musculature. However, American Pit Bull Terriers are also quite costly.

If you enjoyed this article, check out these related articles about the world’s most expensive animals and plants!

link to 10 Reasons Why French Bulldogs are So Expensive

According to the American Kennel Club (AKC), French Bulldogs were the second-most popular dog breed in the U.S. in 2021. However, these pups are also some of the costliest purebred dogs. But why are...